Just five countries will produce double-digit growth rates for total media ad spending in 2023, and of these India will be the only large market to do so. However, 14 countries will see double-digit growth rates in digital advertising, including the US. Although times are tough for the industry, the advertising world is by no means in dire straits on the digital side of the ledger.

Latin American countries will dominate the top 10 in digital ad growth in 2023. Although Brazil is the only country in the region to rank among the world’s top 10 in digital spending, the entire region is still experiencing an ad boom. Five of the Latin American countries we track will be in the global top six for digital growth, and the region as a whole will increase its digital ad spending by 14.0%.

This will be a deceleration compared with the previous two years, but not jarringly so. Inflation is also playing a role in some of the region’s national growth figures, but most of the increases are genuine. Latin America is not yet finished with its organic growth phase.

Beyond Latin America, the other major positive story will be India. Like its peers south of the US border, India is expected to maintain its digital ad spending growth momentum for several more years. In 2023, India will become the 10th-largest total ad market in the world, entering that elite echelon for the first time.

India’s digital ad industry still has enormous room for growth, as traditional ad spending will account for 67.6% of the country’s ad outlays in 2023, a ratio that is almost exactly the reverse of the global average.

Western Europe, Turkey, and Russia all produced deeply negative rates of overall ad spending growth in 2022, but all will bounce back at least marginally in 2023. Some of these wild swings were caused by—or exacerbated by—2022’s abnormally disruptive fluctuations in exchange rates. In the UK, the eurozone, and Turkey, the ad spending outcomes for 2022 were not quite as bad as they appear, thanks to the weakness of the local currency against the dollar. 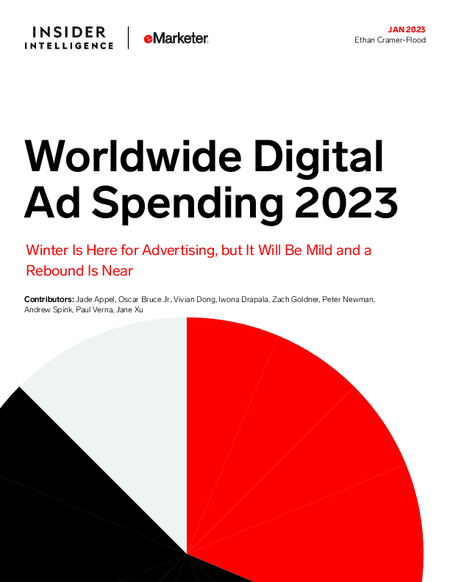