The TikTok train continues to gather steam, with growing user numbers, engagement rates, and ad revenues. But UK marketers have a lot to consider when marketing on TikTok—where catching the eye of users is an entirely different proposition than it is on other social platforms. Here are 3 key points from our recent report.

Europe’s largest airline has frequently applied the Face Builder effect to its TikTok content. This effect allows users to transpose their eyes and mouth onto inanimate objects and use audio to further personify the objects.

Ryanair used this effect to transpose features onto its airplanes, then used very specific cultural audio clips to humorously poke fun at itself, highlighting such things as flight discounts of just €0.01.

TikTok has passed Snapchat as the third most popular social network in the UK. Growth has rocketed since the start of the pandemic. That meteoric rise has tapered to more gradual growth—reaching low single digits by the end of our forecast period—but TikTok’s place at the table remains prominent.

TikTok will have 17.5 million active UK users this year, just ahead of Snapchat, though the gap between the two platforms will widen. By 2026, nearly a third of the UK population, and over half of mobile social network users, will be regular TikTok users.

TikTok’s UK ad revenues will spike by 190.2% in 2022, even higher than the impressive 181.1% growth last year. These levels aren’t sustainable, of course, but strong double-digit increases will continue through 2024.

TikTok’s UK ad revenues now amount to more than Snapchat’s and Twitter’s combined. Its revenues of £0.75 billion ($1.04 billion) this year will eclipse Snapchat’s £0.28 billion ($0.39 billion) and Twitter’s £0.37 billion ($0.51 billion). And the gap between TikTok and the rest will widen as the platform continues to attract advertising spend. 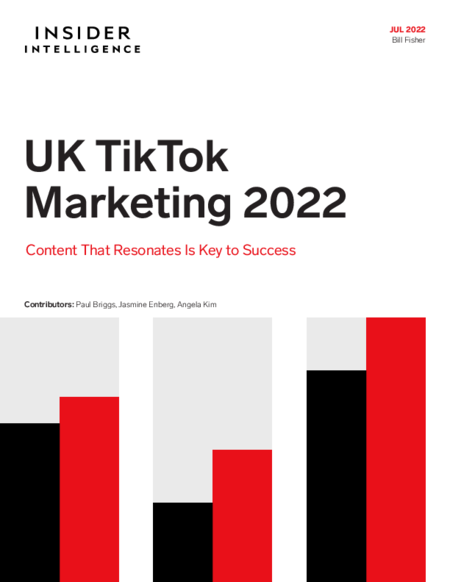