7 strategies for making the most out of marketing on Meta

Article by Insider Intelligence Editors  |  Oct 31, 2022
Download
7 strategies for making the most out of marketing on Meta
Share
Topics
Social Media Marketing
Worldwide

In the last year, Meta—and the overall US digital ad market—have changed significantly. Here are seven strategies from our “The Future of Meta” report that marketers should embrace in the new year:

1. Lean into social commerce ads on Instagram. Ads are a major driver of discovery, inspiration, and purchase on social media. They’re also a smart way to remind potential customers of an item they were previously interested in. To supercharge their social commerce ad strategies, brands should also amplify or boost creator content as shoppable paid ads.

2. Instagram influencer campaigns should be Reels-first. Don’t abandon static posts, but Instagram is prioritizing video—and brands should, too. Keep in mind that Instagram continues to demote repurposed content; to get the widest reach, work with creators to produce original content for Reels.

3. Start planning a creator strategy for the metaverse. Some brands, like Gucci and Nike, have either partnered with or created virtual influencers. Brands that start experimenting with those initiatives now will be ahead of the game by 2024.

4. Advertisers should limit their efforts to experiment until Meta’s ecosystem matures. Marketers are not likely to see any major ROI on Horizon Worlds unless user numbers spike significantly over the next two to three years. Meta already introduced a way for creators to monetize, meaning the path for companies to do so is also clear. However, the advertising side is less clear as users criticized in-game advertising on Quest headsets in 2021. This tension will likely subside over time as early adopters focused on gaming give way to lifestyle users more open to advertising.

5. Be aware of gamers’ skepticism of advertising in the metaverse. Just 35% of gamers told Globant they were in favor of ads in the metaverse, while 40% said they were opposed to the practice. Nearly half didn’t want ads that used eye- or head-tracking technology, a capability that has the potential to be more powerful—and more alarming—than most any other advertising technology.

6. Publishers and advertisers should explore short videos and become more creator-like to maintain connections with news consumers. Users still turn to Meta’s properties for news, even if Meta no longer wants to financially support publishers. Just under one-third (31%) of US adult social media users regularly get news on Facebook, according to July–August 2022 research by Pew Research Center. That’s unchanged from 2021 and greater than for any other social platform in the study. The percentage getting news from Instagram stood at 13% in 2022, up from 11% last year.

7. Use Groups to engage customers and boost the number of new fans. Facebook is increasing the amount of content in users’ feeds that comes from sources other than those the user follows. This includes potential new Groups for users to join. An active Group will stand a better chance of getting promoted to a potential new member. 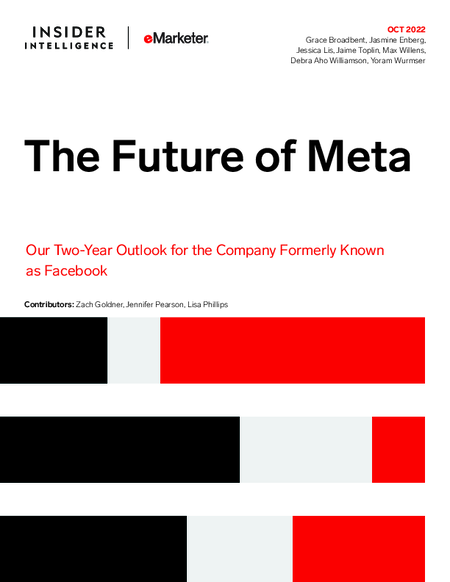 This was originally featured in the eMarketer Daily newsletter. For more marketing insights, statistics, and trends, subscribe here.