Last month, Guardian US and programmatic partner MightyHive teamed up with Google to test how much ad inventory being sold on the open marketplace was not legit.

The team purchased ad inventory—ostensibly from Guardian US—through demand-side platform (DSP) buying via the open marketplace. A similar buy was made specifying verification from ads.txt, a program adopted by publishers to signal that their inventory is what it says it is.

What they found was clear evidence that unauthorized players were pretending to sell Guardian inventory and diverting the revenue to themselves. Of the video ad inventory purchased without validation, 72% was fraudulent.

The good news was that the buy using ads.txt verification seemed to have worked, with the Guardian seeing all the revenue from that campaign.

eMarketer’s latest report, “Cleaning Up the Digital Media Supply Chain: What Will Move the Industry Toward Transparency and Optimization?” examines the current state of the programmatic media supply chain, why advertisers are concerned and what the ecosystem is doing about it.

The top challenge of addressing ad quality issues is tracking down bad actors in the supply chain, according to January 2018 research by ad intelligence firm Ad Lightning. Nearly six in 10 of the US ad operations professionals surveyed called it a significant problem.

Google, Amobee and Quantcast conducted a study last year comparing available inventory from a selection of 16 premium publishers across three DSPs with the publishers’ ads.txt files to determine how much fraudulent inventory was available on exchanges. The researchers found that there were four times more display bid requests than legitimate inventory, and 57 times more video bid requests.

Part of the problem is that the buyers, the marketers, have not pressed for an account of where their ad spend is going. How many consumers would continue to shop at a retailer if they believed there was a one in four chance of not purchasing a counterfeit item? Or how many would eat at a restaurant if there was a 1-in-57 chance of not getting sick afterward? If brands behaved more like consumers, it is hard to imagine the fraud problem would be as large as it is. If media buyers don’t expect and pay for transparency from their suppliers, they won’t get it.

“There's a lot of things that can be eliminated from a fraud or invalid traffic perspective if the buy side would simply require it,” according to Walter Knapp, CEO of supply-side platform (SSP) Sovrn. “I've never totally understood why it took so long for someone on the buy side to put their foot down,” he said, referencing a speech by Procter & Gamble’s chief brand officer Marc Pritchard to the Association of National Advertisers, in which he called the digital supply chain, “murky at best.” Knapp applauded the sentiment, if not the timing. “It benefits publishers that deserve it when buyers only buy quality.”

In the latest episode of "Behind the Numbers," eMarketer analysts Nicole Perrin and Lauren Fisher discuss what the digital supply chain looks like. 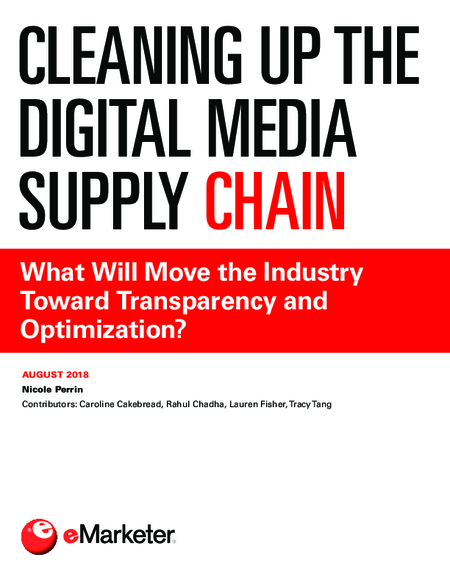 Not sure if your company subscribes? Find out more.

Article
Bad news for publishers: Over half of marketers expect a decline in programmatic ad spending in 2023

Article
Clean rooms are in vogue with advertisers, publishers, and vendors—but there’s a catch

Article
Programmatic advertising and CTV are becoming forces in political advertising—but there’s a ...