The US advertising market is being dragged by the ear into a new, more privacy-focused era. Thanks to regulatory scrutiny in Europe and the US, the market’s largest players—particularly Google and Apple—are making it harder for third-party firms to surveil the browsing behavior of internet users, chiefly by ending support for third-party identifiers and requiring users to consent to being tracked online.

These changes have significant implications for how and where advertisers deploy their digital ad budgets, and as much as $10 billion of publisher ad revenues are at risk, according to a January 2022 Interactive Advertising Bureau (IAB) study.

US programmatic advertising faces some of the greatest possible disruption from these changes. The market, which will more than double in size from pre-pandemic levels to $129.48 billion this year according to our estimates, has grown to its current size thanks in large part to the targeting and measurement facilitated by third-party data.

Removing third-party data will increase costs for marketers and publishers. For all the complaints that have been lodged against third-party data, it is the bedrock of the behavioral targeting that powers advertising, and removing it creates significant consequences.

According to an April 2022 Emodo survey, 80% of marketers said the effectiveness of their ad campaigns declined when they lost identifiers. Additionally, the IAB survey found that ad buying costs could rise by as much as 200% because of a lack of access to addressable audiences.

Those increased costs pose an especially grave threat to the open web, a key revenue source for thousands of publishers. While publishers strive to sell as much of their ad inventory as possible directly, the reality is that many rely heavily on indirect sales to move what’s left. A February 2022 survey by Advertiser Perceptions found that 58% of publishers’ display revenues came through programmatic channels as opposed to direct sales; 42% of those programmatic revenues came from open auctions.

And rather than eat the increased targeting and measurement costs, many advertisers will spend that money in walled gardens instead. A majority of marketers (62%) responding to a survey by Lytics and Sapio said they’d simply spend more money in walled gardens, where the cost increases are less significant. Among consumer packaged goods advertisers, a group that includes some of the heaviest ad spenders in the US, the share of respondents who said they’d move their budgets into walled gardens was even higher (75%).

Publishers’ readiness for these changes is increasing, but as a group they are not fully prepared. In 2020, Google first announced its intent to end support for third-party cookies within two years; in 2021, Google extended the timeline to 2023. (Many industry observers believe Google may move its deadline again.) 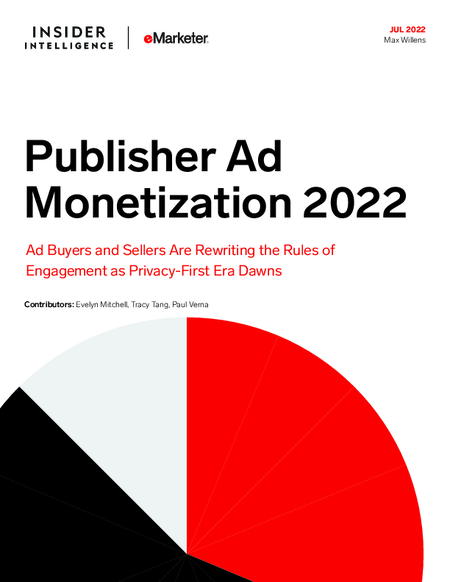