Is Alibaba losing its dominance in China?

Three of the four largest ecommerce companies in the world are based in China—Alibaba, JD.com, and Pinduoduo (PDD)—and they are all still delivering impressive annual sales increases. However, they are also all in a period of structural deceleration in their growth trajectories, and none more so than Alibaba, the world’s largest ecommerce company by gross merchandise value (GMV).

Alibaba recently announced lower-than-expected sales figures for 2020, leading us to revise down our calculations for the company both last year and going forward. This revision has dropped Alibaba’s share of the China ecommerce market below 50% for the first time in its history.

China’s ecommerce titans, and China’s ecommerce market in general, are maturing, and it is becoming harder to produce the outlandish growth figures of years past. And if organic slowing isn’t enough of a concern, China’s economic regulators are on the prowl as well, which doesn’t bode well for the continued domination of the largest players.

Alibaba has been in the news for all the wrong reasons in China for nearly a year, and the situation shows little sign of improving. Alibaba and its affiliated properties—including most notably Ant Financial and AliPay—have been squarely in the crosshairs of China’s financial regulators and antimonopoly watchdogs since mid-summer 2020, and a massive corporate restructuring remains in process.

Enormous fines have been levied and paid, IPOs have been canceled, senior-most executives have been reshuffled, and Alibaba founder Jack Ma has been largely silenced as a public figure.

No one knows what the ecommerce portion of the Alibaba empire will look like once everything shakes out, but the company will certainly have lost access to some of the techniques that it has used to maintain its dominance. Furthermore, the antitrust investigations roiling China’s ecommerce ecosystem are impacting big players like JD.com and PDD as well. They too are being forced to abandon their exclusivity arrangements with merchants and rein in their pricing strategies.

We estimate Alibaba will have a 47.1% share this year, which is still far ahead of its competitors. Alibaba’s loss has mostly been PDD’s gain, although JD.com is gaining share marginally as well. Even after a disappointing 2020, Alibaba’s various platforms (including primarily third-party marketplaces Taobao and Tmall) still generated $1.042 trillion in sales last year, and we project $1.209 trillion in sales this year.

To learn more about our latest forecast for China ecommerce, Insider Intelligence subscribers can read our recent report: 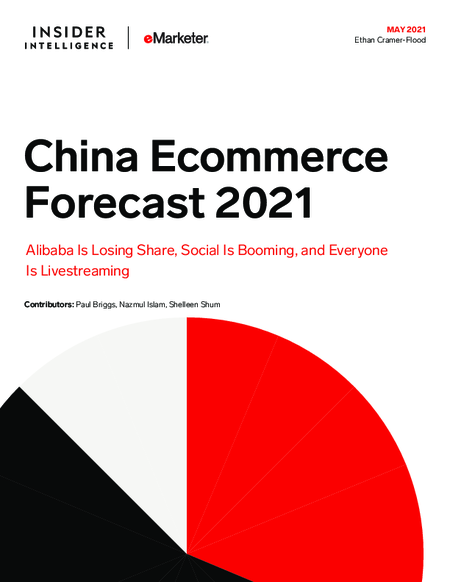