Amazon Remains the Undisputed No. 1

It’s little surprise that Amazon once again ranks as the No. 1 US ecommerce retailer—and by a huge margin.

“What’s surprising is that despite accounting for nearly four in 10 ecommerce dollars, the company continues to gain market share and extend its lead,” said Andrew Lipsman, eMarketer principal analyst and author of our latest report, "Top 10 US Ecommerce Companies 2020: Walmart and Target Climb Rankings on Click-and-Collect Gains."

We forecast that Amazon’s 2020 US retail ecommerce sales will rise 17.2% to $260.86 billion—4 percentage points higher than the expected overall growth rate for US retail ecommerce sales. As a result, Amazon’s market share will increase from 37.3% in 2019 to 38.7% this year while expanding its lead over the No. 2 player from 31.7 points to 33.4 points. We expect this momentum to continue into 2021 when it will reach 39.7% market share.

The ecommerce giant manages to continually outpace the market by a wide margin because it stays several steps ahead by investing in the future. Recently, that investment has been to double-down on its already best-in-class online delivery by rolling out next-day Prime delivery nationwide.

It appears to have paid off quickly, as topline growth surged on the ecommerce side of the business almost immediately in Q2 when the rollout began. The efforts culminated in Q4 2019 when Amazon blew away even the most optimistic forecasts.

In the accompanying earnings call, CFO Brian Olsavsky attributed much of the momentum to Prime’s strength. “We also had a very big uptick in response to the one-day availability that's been building through the year,” he said. “[W]e have more than 150 million paid Prime members globally now … [and] more people joined Prime in Q4 than any other quarter before.”

The improved delivery times also help unlock the biggest opportunity in ecommerce today—online grocery. 2019 represented an inflection point in the adoption of grocery ecommerce, and Amazon’s advantage in logistics positions the company to dominate this next growth phase.

For further insights into the top 10 US ecommerce companies, eMarketer PRO subscribers can read our latest report: 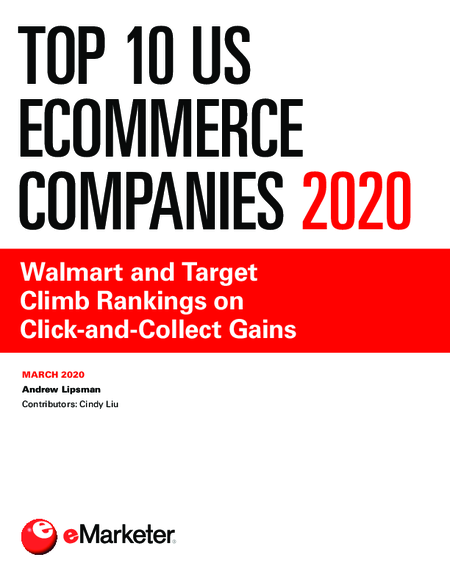 Article
Stitch Fix is all dressed up with nowhere to go

Article
Drizly looks to capitalize on the retail media boom

Article
Inflation is driving digital grocery growth in the US, but there’s more to the story