Amid the Pandemic, Influencers Are Getting Real

While it’s too soon to bid adieu to the aspirational influencer, it’s clear that the pandemic has humbled many of even the most polished creators.

“There’s been a shift toward raw, uncut, and real content,” said Maria Sipka, co-founder and executive vice president at influencer marketing platform Linqia. “That ‘Instagram-pretty’ perfect picture has been shattered.”

That shift has to do as much with limitations on content creation due to shelter-in-place and social distancing measures, as it does with consumers’ evolving expectations of creator content. Cooped up at home, consumers have been more interested in content that either entertains or helps them with their new daily routines, versus the typical, FOMO-inducing (that’s “fear of missing out”) posts many influencers are known for.

“The pandemic has created a lot more innovation in the influencer space,” said Ricky Ray Butler, CEO of influencer marketing network BEN Group. “Influencers have realized that when they can’t produce their typical content, they need to do things differently.”

So have brands. With ad content creation curtailed due to business closures and budgetary constraints, influencer content has emerged as a quick, inexpensive, and easy-to-produce alternative to brands’ own creative.

“Brands have had to abandon large-scale productions in favor of more homegrown, self-produced content,” said Ryan Detert, CEO of social intelligence company Influential. “In that regard, it’s been highly advantageous to the influencer industry that was born and bred making this sort of content.”

One example of sponsored influencer content that ticks the boxes for being both “unfiltered” and helpful is L’Oréal’s campaign with actress Eva Longoria for its $9 Excellence Crème hair dye. The video was shot on a smartphone by Longoria, a longtime L’Oréal brand ambassador, in her bathroom and featured her coloring her own gray roots. The video was eventually turned into a national TV spot.

At the time of this writing, most influencers are no longer housebound, but it’s still not business as usual, with many restaurants and attractions operating at limited capacity. Travel restrictions and other social distancing measures disproportionately affected travel influencers, who rely on open borders and businesses to create their content. But influencers in other categories have also had to adjust.

“Everyone’s been scrambling to make their homes pretty enough to shoot photos in,” said food influencer Jane Ko (@atasteofkoko on Instagram). “I converted my master bedroom into a fake living room years ago to shoot content because it gets the best light in the house, but I’ve had to switch out my rug three times and buy a couple of different coffee tables because nobody wants to see the same setup every time.”

A variation of this article was originally published on Business Insider.

For more about how the pandemic is accelerating changes in influencer marketing, and best practices for brands leveraging their creative, eMarketer PRO subscribers can read our recent report: 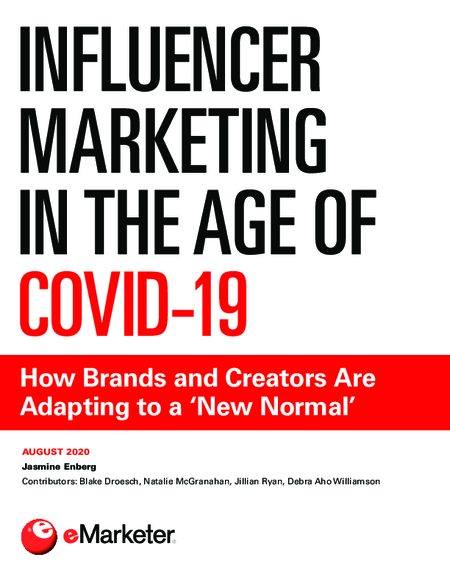 Report by Jasmine Enberg Aug 24, 2020
Influencer Marketing in the Age of COVID-19