Every Mobile World Conference has phone releases, but some of the phones released this week in Barcelona represent the first batch that will run on 5G, the next-generation telecom network that promises faster speeds and quicker responses.

While the mobile world is eagerly anticipating the day when 5G service launches, the first step is to have phones that are truly 5G enabled. Telecom services in the US and Korea will inaugurate 5G in H1 2019 with the phones announced over the past few days. Verizon and three carriers in Korea, for instance, will start selling Samsung’s S10 5G sometime this spring, and Sprint will offer LG’s V50 when it launches its network in May. ZTE, Xiaomi, and Huawei have also released 5G phones this week.

These phones don’t seem much different on the surface, although the S10 5G will have four cameras in order to pick up depth for augmented reality features. Underneath, however, these cameras incorporate new modems and antennae that enable them to run on a broad range of frequencies, including very-high-frequency bandwidths. These “millimeter-wave” bandwidths form the backbone of a lot of early 5G networks, but they pose some serious challenges.

First of all, the waves themselves have problems penetrating walls or cutting through the atmosphere, so they don’t "propagate" well, meaning that signals are only effective over a few hundred meters and telecom providers need smaller cells around more base stations. It also means that these phones needed new antennae designs and nonmetal casing.

Second, the millimeter wave is only one set of bandwidth used for 5G. Many networks will use a combination of millimeter-wave and lower bandwidths, and they’ll also need to accommodate 3G and 4G signals. Sprint, for instance, will launch its 5G network on a midrange band. These early phones will need a lot of energy to run on these overlapping networks, and they’ll need a larger chipset. That’s why a lot of these phones sport large batteries and screens.

The first generation of phones are really more for show than for turning a profit. The networks need the phones to launch their 5G networks, but not many people will actually buy these first-generation phones. By the end of this year, there will only be 3.7 million 5G smartphone subscriptions worldwide, according to data from Ericsson.

The minuscule user numbers belie the phones' impact. Although only a handful of users will own a 5G phone this year, the networks need those phones to commercially release their networks. In fact, T-Mobile is delaying its 5G launch because the 5G-compatible phones won’t be ready until the end of the year.

For potential buyers, the major benefit will be pride in being a first adopter since they won’t see a huge jump in performance. The 5G networks themselves will be very thin in 2019 and still run on 4G infrastructure. So while the big performance leaps are still a year or two away, 5G early adopters will be able to say they were first.

Our latest report explores what companies should be doing to prep for 5G now, and gives an update on 12 countries readying 5G commercial networks. eMarketer PRO subscribers can access the full report now. 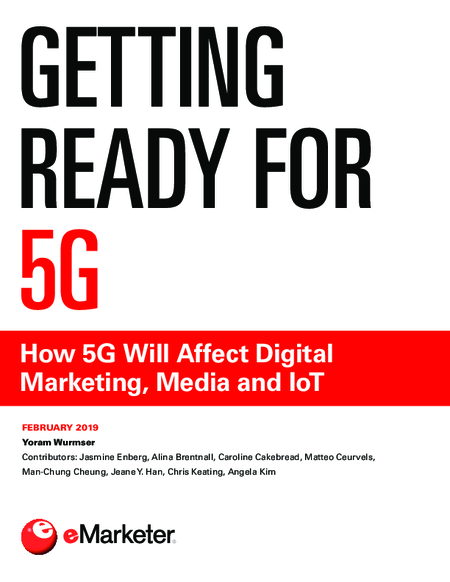 Report by Yoram Wurmser and Jasmine Enberg Feb 26, 2019
Getting Ready for 5G