With rising ad prices and declining audiences, 2022 will be linear TV’s last year as the preeminent ad channel. Much of the money exiting this format won’t go very far, partly because many Americans are shifting their behavior from one content source to another while using the same device.

The number of US users watching ad-supported video-on-demand (AVOD) will surpass 140 million in 2022, up 8.6% YoY. In all, we project two-thirds of the US population will watch CTV content in 2022. That figure is about 14 percentage points higher than it was five years ago.

We project a 33.1% increase in connected TV (CTV) ad revenues for 2022, to $18.89 billion. The rate of that growth will decline but remain robust over the next five years. By 2026, we expect that CTV ad spending will account for more than 10% of all digital ad spending, having more than doubled to $38.83 billion.

Just as we expect consumer media behavior not to change much in 2022, many of those ad dollars that once went to broadcasters may stay with the same corporate parents, since many of CTV’s biggest players are owned by TV broadcasters.

For example, we estimate that Pluto TV (owned by Paramount) will grow its ad revenues 50% in 2022, generating $1.24 billion in CTV alone. Tubi, a competitor that belongs to Fox, will grow faster still (albeit from a smaller base), closing in on revenues of $939.4 million this year, up from $530.8 million.

We project that there will be five players in the CTV space each generating over $1 billion in annual ad revenues by 2023. YouTube, Hulu, Roku, Tubi, and Pluto TV have already created a kind of oligopoly in the CTV ad market. They account for 59.1% of its net ad revenues, a share that will remain essentially flat in the near future, reaching more than 59% by 2024. 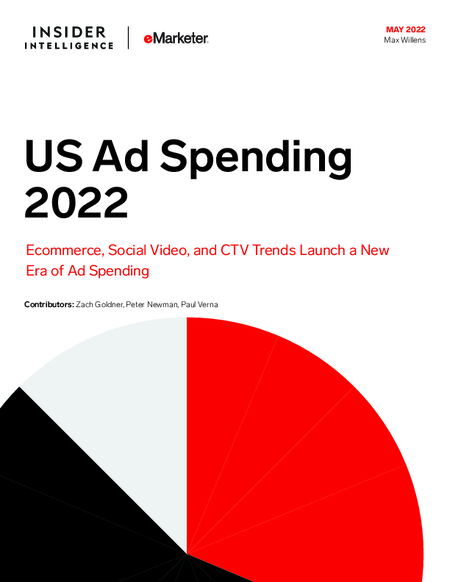