What Are Snapchat and Twitter Doing to Stand Out?

Snapchat and Twitter are very different properties, but they have one thing in common: Both remain in the shadow of Facebook and Instagram. Even though they have far fewer users, solid ad opportunities on each platform are available, and both are managing to produce revenue gains despite their challenges.

eMarketer’s latest report, “Snapchat and Twitter 2018: Many Challenges, but a Few Things Advertisers Still Like,” lays out usage and advertising activity on the two platforms and examines how Facebook’s myriad challenges could affect its usage.

But there are no clear trends about Facebook engagement, and moreover, there is no evidence that dissatisfaction with the platform is necessarily benefiting either Snapchat or Twitter.

In the weeks after the Cambridge Analytica news, which broke in March 2018, studies conducted by privacy researcher Ponemon Institute found a drop in Facebook users’ belief that the company was committed to protecting their private information. In a study conducted in 2017, 79% of respondents agreed with that statement. And in a survey conducted the week following the news, just 27% of Facebook users polled agreed.

However, one week after the Cambridge Analytica revelation, Ponemon found that just 9% of survey respondents had stopped using Facebook, while 45% said they were not likely to stop, and 15% of users said there was “no chance” of stopping.

A study by the Pew Research Center had a more ominous set of findings. In a survey conducted in May and June 2018, 26% of US Facebook users ages 18 and older said they had deleted the app off their phone in the past 12 months, and 42% had taken a break of several weeks or more. In addition, 54% adjusted their privacy settings.

The data comes from a well-regarded research organization, so it shouldn’t be dismissed. At the same time, it isn’t known whether any of the 26% had decided to reinstall the app after deleting it. And Facebook says the ratio of worldwide monthly users who log in daily has remained at 66% for the past couple of years.

Listen to Behind the Numbers
Article&nbspSep 10, 2018
Are Smartphone Users Weeding Out Facebook?

One area where Snapchat and Twitter may get higher marks is in privacy and data security. Hub Research conducted a study in June 2018 of US TV viewers ages 16 to 74 who have broadband at home and watch at least 1 hour of TV per week. The study found that 38% were either very or extremely confident that Snapchat would keep their data secure, and 31% felt the same about Twitter. But only 19% shared those sentiments regarding Facebook. 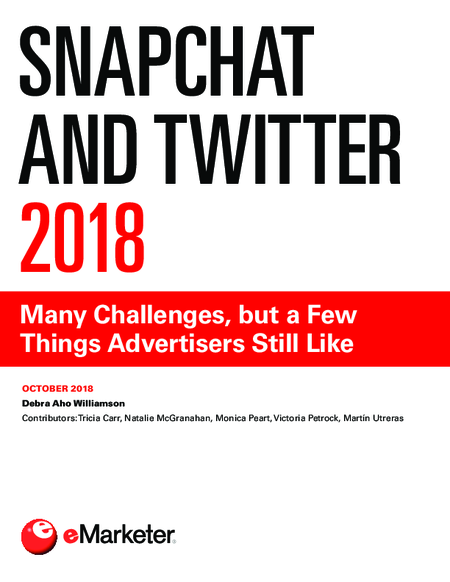 In the latest episodes of "Behind the Numbers," eMarketer analyst Debra Aho Williamson talks about the most important developments for Snapchat and Twitter this year. Listen In.

Article
Meta gets a boost from new ad formats

Article
How to elevate a luxury brand