The media and entertainment industries have traditionally made up a small fraction of the US digital ad market, and we expect their shares to remain flat or diminish through 2021. This partly has to do with traditional media conglomerates tightening their belts; their own ad revenues will continue to decline as ad dollars shift away from print and TV and toward the digital duopolies.

Media and entertainment conglomerates are also keen on advertising through their own channels and platforms. For example, NBCUniversal can advertise its film and TV productions through its streaming platform, Peacock, instead of spending digital ad dollars to market them elsewhere. The mass consolidation of media companies in recent years, on top of the rollout of streaming platforms and other digital properties, has made it easier for media and entertainment advertisers to reach larger audiences on digital without having to spend as much as their counterparts in other industries.

Yet another factor that will cause media ad spending to contract are the production delays in scripted television. TV networks have, in turn, delayed the ad campaigns that surround their fall TV lineups. As traditional media conglomerates lose more ad revenues because of the pandemic, they will be less likely to spend ad dollars of their own. We expect significant declines in ad spending across traditional media in the US this year, including TV (-15.0%), print (-24.7%), and radio (-23.0%).

In the entertainment category, it’s the cancellation of live events that has caused advertisers to pull back. While there have been signs of recovery—including limited attendance at certain NFL games and the reopening of some movie theaters—there is still no timetable for the return of live events at full capacity.

One bright spot for entertainment, however, has been the increase in time spent with streaming services and gaming while consumers stay at home amid the pandemic. According to a May 2020 survey by GlobalWebIndex, 44% of US internet users said they were watching more shows and films on streaming services because of the pandemic, while more than one-quarter (26%) reported spending more time on computer and video games.

To learn more about how the media and entertainment industries will allocate their digital spending amid the pandemic, eMarketer PRO subscribers can read our recent report: 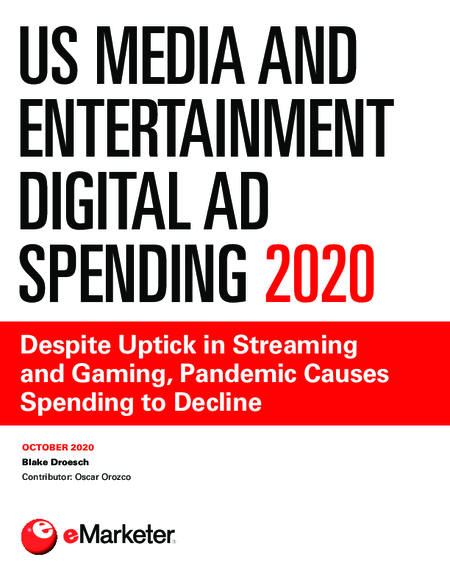