As viewers spend more time with ad-free services, marketers must get craftier with their media plans

In 2021, the biggest US beneficiary of the streaming bonanza will be Disney. After a plethora of streaming competitors launched in 2020, Netflix still added a substantial number of subscribers. As impressive as Netflix’s sustained dominance was Disney+’s ability to quickly gain viewers. These developments show there’s room for multiple services to thrive in this fast-growing market.

But no other new US streaming service had a debut like Disney+ did—we estimate that it will reach 72.4 million US monthly viewers in 2020, its first full year in service. We forecast that more than one-fifth of the US population will use Disney+ this year, and in 2024, more than one-third will. So far, other streaming entrants suffered from distribution limitations, confusing branding, or a lack of quality programming. None of these problems have hampered Disney+, which will become the third most popular US streaming service by the end of 2024.

There is still plenty of time for other streamers to gain adoption. But other recent entrants into the streaming wars will struggle to immediately make a dent in the market.

During the pandemic, streaming has been one of few successes for The Walt Disney Co., which has suffered with theme parks and theaters sidelined. The company reorganized its media division to further emphasize streaming. While other media conglomerates are also restructuring their businesses to focus more on streaming, Disney’s pivot is particularly consequential because it operates numerous streamers including Hulu, ESPN+, and its upcoming Star service, named after the India-based media company that Disney acquired. This move will further solidify Disney as a streaming leader alongside stalwarts Netflix and Amazon.

Disney+’s success matters to marketers because it represents streaming services becoming more reliant on subscriptions than on advertising. A massive and growing audience is unreachable with standard video ads, which bolsters other avenues for awareness campaigns such as outstream video and digital outdoor ads. Of course, there is room for both monetization strategies; digital video ad spending is growing, and Disney-controlled Hulu monetizes through ads.

Still, most time spent streaming happens devoid of advertising. The ad-free services Netflix, Amazon Prime Video, and Disney+ account for about half of all time spent with streaming, according to separate studies from Nielsen and Comscore. The other half is split between ad-free services (like Apple TV+), ad-reliant services (like Pluto TV), and hybrid services (like Hulu). When added together, there is a tremendous amount of streaming happening without ads, which is how many users like it. As Disney+ becomes more popular, the share of time spent with ad-supported streaming services will decline further. Marketers will need to take this into account when planning campaigns.

This is just one of our 10 predictions about top developments in 2021 that should be on marketers’ radars. To see the rest, Insider Intelligence subscribers can read our recent report: 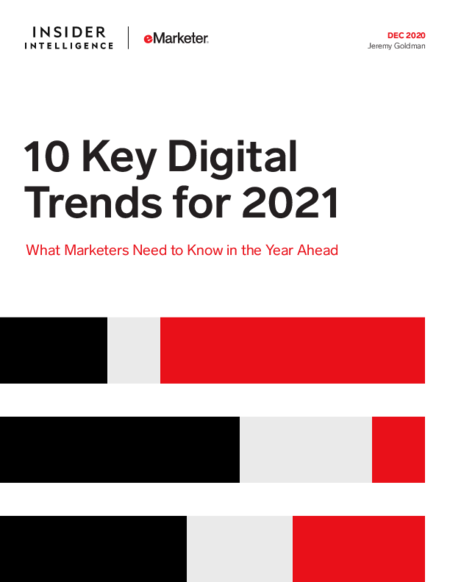