Do Most Searches Really Start on Amazon?

Historically, most marketers have equated search with general search engines like Google. But many of consumers’ most commercially oriented queries are entered directly on retail sites. And for the most part, that means Amazon.

For most internet users, Amazon has long served as a default starting point for at least some searches. According to the "State of Amazon 2016" report from retail experience firm Bloomreach, close to half of US internet users surveyed had named Amazon as the first channel they used to research products online in 2015—already ahead of the 34% who chose search engines. By September 2016, a majority of respondents (55%) chose Amazon as their first stop.

Since then, research has varied somewhat, likely depending on methodological factors, including question wording. For example, in May 2018, ecommerce tech provider Adeptmind asked US internet users about the first place they would go when digitally searching for an item and found a plurality chose Amazon (46.7%), ahead of second-place Google (34.6%) and a different search engine (4.7%).

But when cloud retail provider Kibo Commerce and customer experience firm Watermelon Research asked US digital shoppers in January 2018 about where they researched brands, products or services, more selected search engines (69%) than Amazon (61%).

One of the most recent and largest surveys on this subject to date comes from CivicScience. In June 2019, US internet users ages 13 and older were asked where they “typically start” when shopping for a product online. Just under half of respondents said they went to Amazon, and among those who normally shopped online, the share starting on Amazon was about 58%.

Internet users’ likelihood of starting shopping for products on Amazon varied little by age and was a majority activity across all age groups, per CivicScience.

There was significantly more variation depending on whether respondents were Amazon Prime members and on their frequency of using their Prime membership. Among internet users who weren’t Prime members, Amazon and Google were equally likely starting points when shopping. But among those who had Prime memberships and used them at least weekly, eight in 10 started their digital searches on Amazon—compared with just 12% who started on Google. (We estimate that 51.6% of US households had an Amazon Prime subscription in 2019.)

For some marketers, Amazon clearly represents a major source of search referrals. Data intelligence firm Jumpshot analyzed where product searches began that resulted in hits on its clients’ product pages. In 2015, the split was 54/46 in favor of Google. By 2018, the same split flipped in favor of Amazon.

“Starting product searches on Amazon isn’t as widespread as Google’s near-worldwide dominance as a general search engine, but it is common across several markets where Amazon has a significant ecommerce presence,” said eMarketer principal analyst Nicole Perrin and author of our latest report, “Search in 2020: How Consumer Search Behavior Is Adapting to Mobile, Voice and Visual Channels.”

“Amazon has capitalized on the huge number of product search queries it serves up results to by offering keyword-targeted, [cost-per-click] ad products—search ads—that now attract billions in spending, primarily by retailers and product marketers that sell items on the ecommerce marketplace,” Perrin said. We estimate that Amazon netted almost 13% of US search ad revenues last year, a share that’s doubled since 2017.

It’s important to note that most of the above research is focused on product searches—and in some cases, surveys don’t ask about “search” specifically, but about “shopping” or “research.” It’s likely that Google is still the first choice for search applications that aren’t product-related, that aren’t related to products frequently sold on Amazon or that take place higher in the funnel.

Paid search monitoring service BrandVerity asked US consumers where they would start a product search for a specific branded item—for example, “Nike shoes”—and found that 56% chose Amazon, compared with 30% who selected Google. When consumers were asked the same question about shopping for an item like “running shoes” without knowing in advance what brand they were looking for, they were more likely to choose Google (52%, compared with 37% who chose Amazon). Bloomreach had similar findings back in 2015.

To learn more about search behavior, including how consumers are searching on mobile, with voice and on ecommerce channels, eMarketer PRO subscribers can read our latest report: 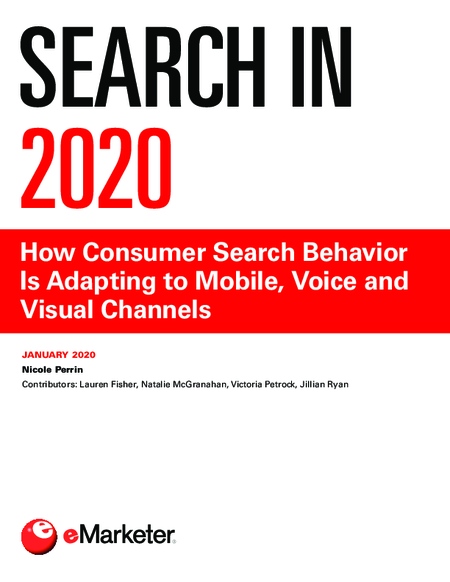