The global retail market will reach $25.038 trillion in 2019, an increase of 4.5% and a slight acceleration in growth vs. the prior year, per our estimates. At the same time, it represents a marked decline from the five years preceding that, when global retail sales grew at rates between 5.7% and 7.5% each year.

“This consumer spending slowdown over the past two years reflects growing economic uncertainty and a dampening economic environment across many corners of the globe,” said Andrew Lipsman, eMarketer principal analyst and lead analyst of our latest report collection “Global Ecommerce 2019.”

“China’s economy, which has been surging over the better part of the past decade, has seen GDP growth level off considerably,” he added.

Even with the cooling off of China’s previously hot consumer economy, Asia-Pacific will still lead the global ecommerce growth charge in 2019. We expect the region's sales to increase by 25.0%, reaching $2.271 trillion and representing 64.3% of global ecommerce spending. Latin America and Middle East/Africa will experience identical year-over-year growth rates of 21.3%, slightly outpacing the global average, while North America (up 14.5%) and Western Europe (up 10.2%) are the laggards.

“GDP growth in Europe has also stalled on several fronts, and even a hot US consumer economy appears to have its best days in the rearview mirror,” Lipsman said.

Overall, six of the top 10 fastest-growing ecommerce countries in 2019 hail from the Asia-Pacific region, led by India and the Philippines at more than 30% growth, and rounded out by China, Malaysia, Indonesia and South Korea. Latin America boasts the top-growing overall ecommerce market—Mexico at 35.0%—and No. 8 Argentina. Even more mature regions for ecommerce like North America (Canada, 21.1% growth) and Europe (Russia, 18.7% growth) claimed spots in the top 10. 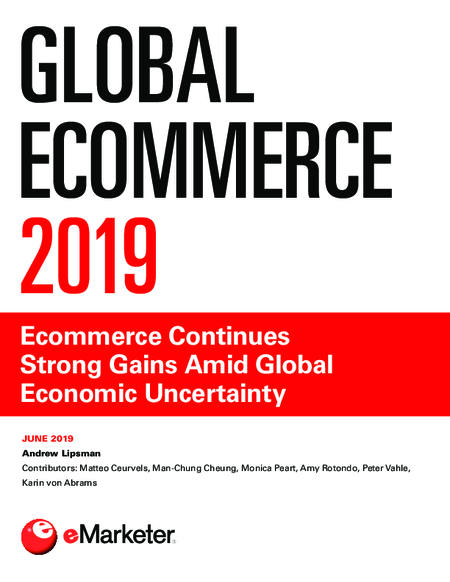