There’s no denying Facebook is a commerce powerhouse. It has a highly developed shopping ecosystem, the largest US digital buyer base, and has successfully closed the loop from discovery to purchase with a native checkout functionality and payment service, Meta Pay (previously Facebook Pay). But it also has Facebook Marketplace, which is primarily intended for C2C shopping and buying, though it also allows companies to list their items and place ads.

A large number of Facebook buyers are likely shopping via Marketplace. It’s impossible to parse out how many Marketplace purchases are C2C and how many are driven by brand listings or ads. But it’s clear that Marketplace accounts for a large share of total purchases made on Facebook.

The popularity of Marketplace could be a good thing for Facebook in an economic downturn. Shoppers looking to save money may turn to C2C online marketplaces rather than brands to make purchases, potentially boosting spending for Facebook. In fact, Facebook buyer growth will bump up slightly to 11.9% in 2022—due in part to strong sales on Marketplace—before dipping to 3.5% next year, per our forecast.

But Marketplace’s strong showing puts a wrench in some analyses in which Facebook ranks well ahead of other social commerce platforms. That includes our own: If C2C purchases account for a significant share of Marketplace transactions, then Facebook’s B2C buyer base may not be as large as some people think it is, nor would it be fully comparable to those of other social platforms. Facebook is the only platform with an online marketplace or strong C2C sales, although Snapchat now allows users to share eBay listings in Stories or directly with their contacts. 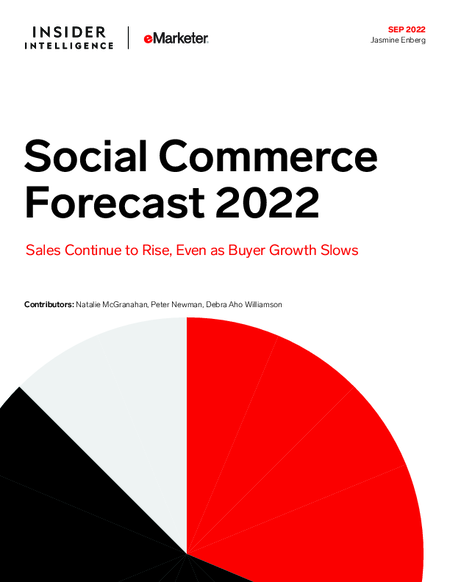 Article
TikTok rolls out Shop feature to select US merchants

Article
How to appeal to Gen Z holiday shoppers, based on data