In 2021, the number of monthly Facebook users in the US will increase by less than 1% year over year, the platform’s lowest annual growth rate to date.

Much of this deceleration is due to last year’s faster-than-expected growth of 3.3%, which was driven by changes in media habits during the pandemic. That helped to push future accelerations forward, and as a result, Facebook will see slower user growth for the rest of our forecast period, which ends in 2025.

The “young-person exodus” is hardly a new story for Facebook and continues to depress its overall user growth. While the platform will gain 19.4 million users ages 25 and older between 2019 and 2025, it will lose 4.1 million users ages 12 to 24 during that time frame.

Even so, Facebook will maintain its 60.9% penetration of US internet users through the end of our forecast, as well as its standing as the No. 1 social network based on total monthly users. Its sister property Instagram ranks second with 118.9 million monthly users expected this year, followed by Pinterest with 91.1 million.

Third-party surveys place the platforms in roughly the same order. For example, an Edison Research and Triton Digital study found that 61% of US consumers ages 12 and older were on Facebook as of January 2021, down slightly from 63% in 2020. Instagram, Pinterest, Snapchat, and TikTok rounded out the top five.

What it means for marketers: Even though there have been many calls for users to delete their Facebook accounts when one crisis or another has surfaced, the social network has been able to retain the majority of its base, and it continues to eke out growth.

Facebook’s ongoing attempts to reduce dissent and negativity and turn the platform into a more positive place may help staunch some of the outflow (but likely won’t attract new users). What probably won’t help, however, is if Facebook decides to make its indefinite ban of former President Donald Trump permanent: 50% of US adults surveyed by Pew Research Center in April said the ban shouldn’t be permanent, while 49% thought it should. This suggests Facebook users are heavily divided on the topic.

Another question on marketers’ minds is whether Facebook users will change how they use the platform in response to the recent rollout of Apple’s iOS 14.5 and its pop-up notification allowing users to opt in or out of tracking.

We don’t expect most users to stop using Facebook because of the notification, but it will cause some to feel differently about Facebook using their data.

So far, there is conflicting data on how many consumers will opt in to tracking or not. On the positive side, a January 2021 survey from SellCell, an online marketplace for selling pre-owned mobile devices, found that 39% of US iPhone or iPad users would consent to tracking if it was by a familiar app like Facebook or Instagram.

But another study, from Flurry (a unit of Verizon), found that just 5% of US iOS 14.5 users opted in to tracking in early May. Flurry said that its analytics tool is installed in more than 1 million mobile applications, and that it has tracked daily opt-in rates through data from 2.5 million daily active mobile users.

For more on our latest forecasts for US social network users and time spent with social media, Insider Intelligence subscribers can read our recent report: 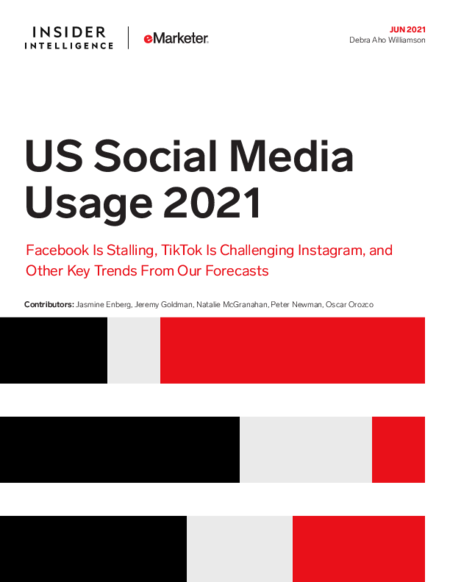 Article
TikTok reels from multiple US government bans and lawsuits

Article
How TikTok could help boost social commerce in the UK

Audio
The Daily: Our relationship with social media, a 2023 trend, and people's views of Twitter ...