As digital marketers try to connect with a growing US Hispanic population, they will need to get past the outdated picture of a population languishing on the wrong side of a gaping “digital divide.” Thanks in part to smartphones, Hispanics have become a very digital cohort.

Early in the digital era, Hispanics did lag significantly in internet penetration. That's no longer the case, though. We estimate that 82.8% of Hispanics will be internet users this year—with penetration differing just marginally from the 85.0% figure for the total population.

Hispanics were early adopters of smartphones. And though the population in general has caught up, smartphone penetration among Hispanics is a robust 69.1%, on par with that of black, white and Asian consumers. Hispanics have also adopted online social networks in large numbers, and we estimate that 65.5% will be users this year—slightly higher than the 60.5% figure for the total population.
There are a couple of important respects in which Hispanics’ digital wherewithal does lag behind that of the general US population. A Pew Research Center poll in January 2018 found that Hispanic-headed households are less likely than total households—47% vs. 65%—to have home broadband. Hispanics also underindex somewhat for owning a desktop or laptop computer. A GlobalWebIndex survey in Q4 2017 identified 79% of bilingual Hispanics vs. 92% of non-Hispanics as computer owners. The shortfall was especially sizeable for Hispanics who are mainly Spanish speakers, only 65% of whom reported owning a computer. Both of these factors help explain why smartphones play an outsize role in Hispanics’ overall digital activity. Still, that is a trend one sees extending across ethnicities.
But as discussed in a recent eMarketer's report, “US Hispanics and Digital: Smartphones Power Activity; Digital Video, Social Media Capture Attention,” there is an enduringly distinctive aspect of Hispanics’ digital usage (and media usage in general): the ongoing issue of English vs. Spanish in Hispanics’ day-to-day lives.
And this is not going away even as the demographic weight of the Hispanic population swings away from immigrants and toward those born in the US, with the latter now outnumbering the former by nearly 2-to-1. While this inevitably pushes up the proportion of Hispanics who are English speakers, Spanish remains highly important. And, indeed, as the total Hispanic population grows, the absolute number of Spanish speakers is growing, even as the proportion of Hispanics who mainly speak Spanish trends downward. 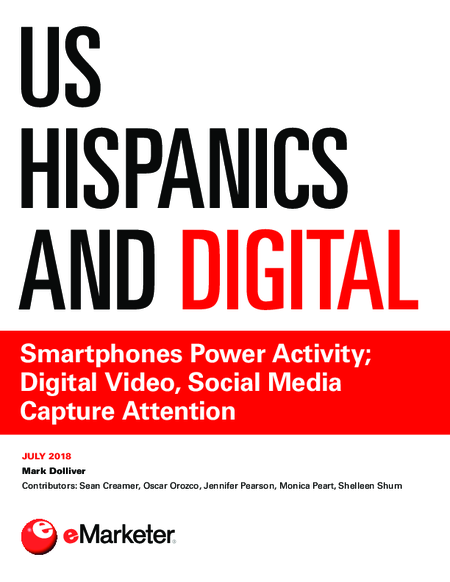 Report by Mark Dolliver Jul 18, 2018
US Hispanics and Digital

Not sure if your company subscribes? Check here.

Spend some time with analyst Mark Dolliver as he highlights some of the key findings of his report on Hispanic consumers—on the new episode of eMarketer's "Behind the Numbers" podcast.

Article
US Hispanic's challenges with healthcare highlight an untapped opportunity for marketers, providers

Article
Hispanic Media companies woo advertisers, both at NewFronts and via acquisitions

Article
Hispanic consumers remain an underserved demographic for many marketers