In France, the Pandemic Has Boosted Ecommerce for Good

According to the Fédération du e-commerce et de la vente à distance (FEVAD), retail ecommerce sales in France declined in March 2020 but recovered rapidly in April. Across 40 digital retailers surveyed, ecommerce sales (excluding grocery) were up between 11% and 21% in April. Retailers of tech and entertainment products reported sales gains of 26% to 27%, compared with the beginning of March. If grocery sales were included, April ecommerce sales would have posted even greater increases.

In an April 2020 GlobalWebIndex survey, 23% of internet users in France ages 16 to 64 said they expected to visit physical stores less frequently post-pandemic, and 27% planned to spend less time in-store. Some 15% of respondents said they would adopt click and collect, and 17% would shop more online for home delivery.

Some consumers plan to do more online shopping in the future. In an April 2020 survey conducted by McKinsey & Company, 20% of adults in France thought their digital grocery shopping would increase after the pandemic, and 15% thought they would shop more online for nongrocery items. Some 14% of respondents said they expected to shop less in physical (nongrocery) stores, and 24% planned on fewer visits to shopping malls.

“During lockdown, some consumers may have overestimated how much their future behavior will change and may readily revert to older habits later this year or next if physical shopping feels genuinely safe again,” von Abrams said. “At the moment, that seems a long distance away.”

Moreover, the convenience of ecommerce may win some shoppers over permanently—and not just grocery shoppers. The GlobalWebIndex survey found that many internet users in France who expected to buy more digitally post-pandemic were also interested in shopping more in other product categories. Some 15% said they would be more likely to order clothes online, as well as food and grocery items. Double-digit percentages of respondents also thought they might order more cosmetics, beauty products, household essentials, personal care items and personal electronics online.

For more on ecommerce behavior in France and how the country's retail landscape compares with Western Europe, eMarketer PRO subscribers can read our recent report: 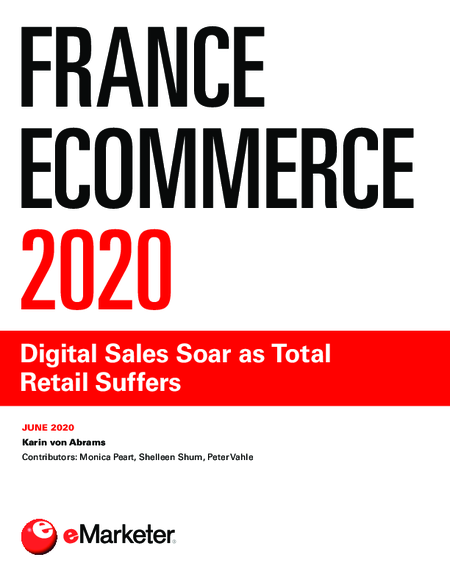