Google launched its first ad technology product, AdWords, 22 years ago, and its ad tech collection has expanded, consolidated, and rebranded several times since. Its current roster includes Google Ads (formerly AdWords) and DV360 on the demand side, as well as AdSense, Google Ad Manager, and AdMob on the supply side.

It can be challenging to differentiate between the individual elements of Google’s ad tech stack. That’s by design: There’s a lot of overlap, and each element is meant to be stronger, or at least easier to use, when paired with other Google elements. A complex and highly integrated ad tech stack is a great defense against competition.

The most serious threat to Google’s ad tech dynasty is regulation. Google has been at the center of countless antitrust lawsuits worldwide, with governing bodies slowly forcing more balance in the advertising marketplace. The recently introduced Competition and Transparency in Digital Advertising Act, for example, would compel Google to sell off its ad tech products.

Without its ad tech business, Google would still be a formidable force in digital advertising. After all, most of its ad revenues come from search. Put another way, Google’s success in advertising is not contingent upon its ownership of the entire tech stack.

But there’s a reason Google’s prepared to put up a fight, at least in the US. Google’s ad tech provides visibility into ad transaction signals—a rich source of consumer data that reinforces the rest of Google’s advertising business in ways that are hard to quantify. As the industry contends with evolving privacy compliance standards, Google is understandably clinging to every bit of its precious first-party data. To this end, Google has offered to restructure so that parts of its ad tech business sit in a separate company under Alphabet, according to July reporting from The Wall Street Journal. Bloomberg has since reported that this concession is unlikely to satisfy the US DOJ, which will move forward with a planned antitrust lawsuit.

It's still possible the Competition and Transparency in Digital Advertising Act will fade into oblivion. But the current regulatory landscape doesn’t favor Big Tech, and with foreign governments regularly dishing out fines and introducing new legislation, it’s highly unlikely Google will make it through the next five years completely unscathed.

Google is still central to the identity resolution conversation no matter what happens on the antitrust front. Through its Chrome browser, its share of the desktop/laptop and mobile device markets, and its Privacy Sandbox initiative, Google has harnessed its roles of catalyst, gatekeeper, and arbiter to insulate itself against the vulnerabilities that its ad tech competitors face as third-party identifiers are phased out.

Note: Our analysts assessed 23 of Alphabet’s business divisions based on five factors: maturity/iteration; disruption; integration; leverage; and prediction for a 5-year outlook. The scale used for the 5-year outlook power rating is: 1=Out of business; 3=Leader; 6=Massive growth. The 5 year outlook takes into account all aspects of the business analyzed, as well as our analysts’ knowledge of the competitive landscape for each division. 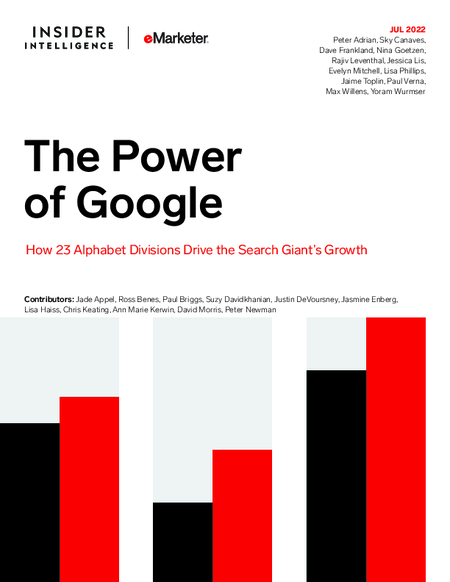