Hispanic consumers make up over 18% of the total US population, which equates to about 62 million people, according to the US Census Bureau’s most recent American Community Survey. This is an increase of 23% over the last decade. In contrast, the overall US population grew by just 7%. Hispanic population growth contributed to 51.1% of the US’s total population growth during this period.

Hispanic consumers are consequential contributors to GDP growth and consumption

Hispanic Americans contributed $2.8 trillion, or 13%, to US GDP as of 2020. Latino GDP has grown 2.6 times that of non-Latino GDP since 2010, per a 2022 Latino Donor Collaborative report. If the Hispanic population in the US was counted as an independent country, its GDP would be the fifth largest in the world and the third-fastest growing. The rising economic power of Hispanic people means strength and progress for the US.

Hispanic consumer expenditures grow faster than that of non-Latino consumers. Real consumption—the amount spent after accounting for price inflation—grew more than three times faster from 2010 to 2020 versus non-Hispanic consumers. This was driven by high-income households, which represent the fastest-growing segment of the Hispanic population, per McKinsey & Company analysis. Latino buying power is projected to reach $2.6 trillion by 2025; the population's growth in buying power from 2020 will be nearly 50% more than that of white households, which hold the largest share of the market.

The Hispanic remittance market is substantial. Remittance outflow from the US will total $76.99 billion in 2022, according to our forecast. Mexico remains the top destination country: 95.5% of the estimated $56.24 billion in remittance inflow to Mexico in 2022 will come from the US. Guatemala is in the fifth spot. There is enormous potential for financial services companies to court Hispanic consumers.

Note: The term “Hispanic” typically refers to those from Spanish-speaking origins; “Latino” refers to people from Latin America, including those speaking Portuguese. In this report, we use the terms Hispanic and Latino interchangeably to identify the broader community that encompasses both groups, as research shows that this community prefers those terms. 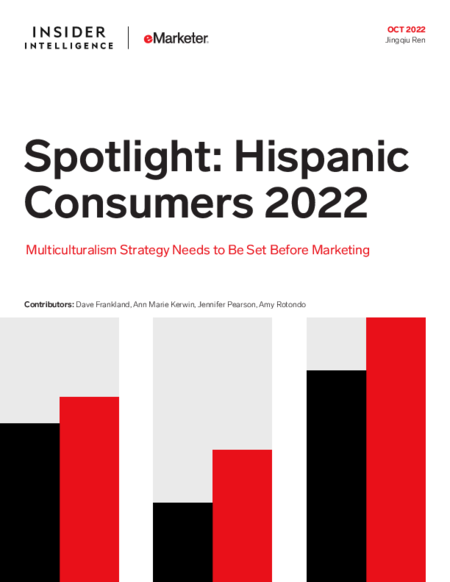 Article
Q&A: How Rakuten entices customers to buy in a time of high inflation

Article
Apple Music and Apple TV+ both see price hikes, as consumers debate whether or not to cut back on ...