The lockdown heightened consumers’ awareness of brands that could meet their needs, particularly within digital channels. This has led to an increased degree of brand switching.

“We know that people have a certain propensity for brand loyalty,” said Rachelle Denton, creative strategy director and co-founder of creative and data specialist The Storm Collective, who was interviewed for our recent report “UK Pandemic Effects: Mindful Marketing in a More Digital Post-Pandemic Landscape.”

“However, many millennials and Gen Zs have spoken about having switched brands at some point, for a variety of reasons,” she said. “Many said that because they were shopping online, they were exposed to new brands more than ever before. Tactical advertising obviously played a role in that. Most people, around 42%, said that they would stick with those brands they recently encountered.”

Loyalty is more important further up the age brackets, though, and transitioning that loyalty to digital will be key.

“[Retailers oriented toward older consumers] will have to focus a lot more on loyalty in general,” said Susanne McKinley, marketing manager at food packaging company Tetra Pak. “Pre-pandemic, the local butcher or baker would have had a loyalty card, but they haven’t been open in months, so they’ve lost that traction. If they’d operated in a digital form, they could have continued to build some traction with consumers to either get them back in store or keep them online.”

In retail, and particularly grocery, a history of building strong loyalty ties that translate to digital has kept some of the key players in good stead during the pandemic—though agile responses to the crisis have helped.

Ocado, the UK’s leading online-only supermarket, suffered unprecedented difficulties early in the lockdown. Its app and website couldn’t cope with demand, customers were held in queues for hours at a time, and new customers were turned away. However, the company managed to retain goodwill partly because of its pre-pandemic customer service and a healthy dose of mindful strategy pivots.

“Ocado customers were waiting in a queue up to 10 hours to get a delivery slot, which provided neither a great experience nor positive sentiment toward the retailer,” said Gemma Spence, CEO of OMG Transact, the ecommerce arm of Omnicom Media Group. “But it didn’t lose that many customers because within the grocery sector, consumers are very loyal to the retailer they choose. And that’s because of loyalty programs, incentive schemes, and money-off deals.”

“Tesco was slightly ahead of the curve in terms of consumer habits and changes in behavior,” Spence said. “It went for a very demand-led view based on predictive insights, using its loyalty data and matching it to geography to prioritize those in need, including health workers and care workers. By tying together consumer demands, the technology, and consumer experience, all underpinned by customer data, Tesco performed particularly well to meet the core needs of its new and loyal customers.”

For more about the pandemic’s effects on the UK ad industry and what the post-pandemic environment might look like, eMarketer PRO subscribers can read our recent report: 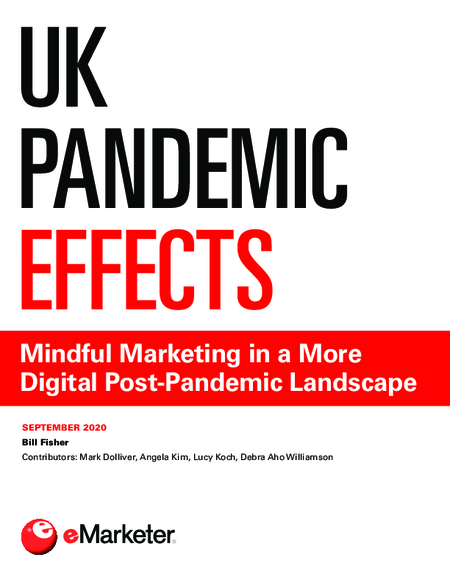