How D2C Brands Are Managing the Holiday Season Dynamics

As some traditional brands and retailers flounder, a host of direct-to-consumer (D2C) brands have risen to capture US shoppers’ imagination—and an increasing share of their wallets. Many of these challenger brands haven’t yet leaned into holiday marketing like their established counterparts. But with continued business momentum, the ability to make marketing investments and expanded physical presences, this year should see additional emphasis.

“The category most ripe for a D2C upstaging is women’s intimate apparel in the wake of some missteps by category leader Victoria’s Secret,” said Andrew Lipsman, eMarketer principal analyst and author of our latest report, “Holiday Shopping 2019: Mixed Results Expected Amid Tight Calendar and Economic Uncertainty.”

“During last year’s holiday season, Victoria’s Secret CMO Ed Razek threw shade at challenger brand ThirdLove for featuring plus-size and transgender models in its advertising—and later stepped down after 36 years with the company,” Lipsman said. "ThirdLove then launched a powerful counterattack, with the company’s co-CEO Heidi Zak responding to the jab in a scathing open letter full-page ad in The New York Times."

Since then, Victoria’s Secret has been in a weakened position amid declining sales, the closure of more than 50 stores, staff layoffs and mounting sentiment that the brand is losing touch with modern women. Chastened by the backlash, the retailer canceled its annual televised holiday fashion show and hired its first transgender model as it looks to reboot the brand.

Taking advantage of the opportunity to fill this vacuum, another inclusive D2C brand, Savage X Fenty by Rihanna, inked a deal to hold its second annual fashion show on Amazon Prime Video, which debuted on September 20. The combination of Prime Video’s massive distribution and added buzz amid the notable absence of the Victoria’s Secret show could turn the brand into a household name.

Emboldened by these examples, D2C brands in other categories are launching their own holiday attacks at incumbents. Travel brand Away’s mini-suitcase gift set, which features an assortment of personal care travel accessories, is a clever holiday offering at a reasonable price point. The stylish facsimile of Away’s full-size luggage serves as a great branding vehicle and physical entry point into the brand. Men’s personal care brand Harry’s is pushing sleek holiday razor gift sets as it continues to encroach on market leader Gillette. And D2C beverage startup Haus released a seasonal Bitter Clove aperitif.

“D2C brands are savvy and innovative marketers that find ways to stand out amid the noise, and there’s no more noisy time than the holidays,” Lipsman said. “With smaller marketing budgets, they need to ensure their message isn’t simply overwhelmed by traditional brands and retailers. One advantage they can leverage is their direct relationships with customers to communicate with them at opportune times.”

Last season, mid- and long-tail ecommerce retailers—defined as those falling outside the top 20—saw three distinct periods of above-average performance, according to data from Rakuten Intelligence.

The first was during the Cyber Five period (the five-day span between Thanksgiving and Cyber Monday), likely due to heavier email marketing pushes. Two other periods where they overindex are in mid-November around Singles’ Day/Veteran’s Day and in the days following Christmas. Both windows offer the chance to take advantage of less competition for eyeballs in their customers’ email inboxes or on digital advertising channels.

eMarketer PRO subscribers can read about the other key factors shaping the upcoming holiday season, as well as see our latest retail, ecommerce and mcommerce forecast in our latest report: 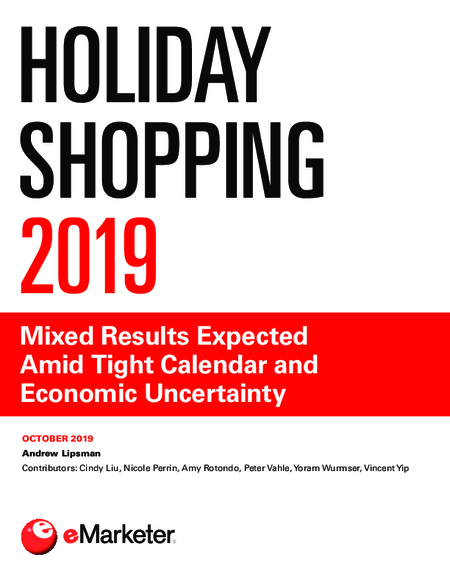 Not sure if your company subscribes, you can find out here.

Article
Which retailers benefited most from Prime Day 2022?

Article
The holiday shopping season is starting earlier than ever

Article
How the top 5 Prime Day categories shifted this year

Article
How inflation will affect shoppers this holiday season

Article
For nearly 3 in 5 parents, back-to-school supplies strain the budget

Article
The state of outlet retail in 2022

Article
Q4 is no longer as important for Latin American retailers