How Digital Are Millennials in Their Shopping?

At a life stage that entails lots of buying, millennials are combining digital and in-store shopping in ways that work best for them.

“These are the omnichannel consumers, equally happy shopping online as they are shopping in-store,” said Joan Driggs, vice president of content and thought leadership at IRI, who was interviewed for our latest report, “US Millennials 2020: How's that Adulting Thing Going—in Digital Usage, Shopping, Finances and Homeownership?”

Highly digital in other aspects of their lives, millennials naturally incorporate digital into their consumer behavior. We estimate that 85.9% of millennials in the US will be digital buyers this year.

There’s no prize for guessing where much of millennials’ online shopping occurs. A March 2019 report by CouponFollow (based on January 2019 polling) said two-thirds of online shoppers ages 22 to 37 make at least half of their online purchases on Amazon. They’re certainly on the platform a lot: In Feedvisor polling in February 2019, 74% of 23-to-38s said they visit Amazon at least weekly, including 25% who do so daily or almost daily. The 2020 edition of Roth Capital Partners’ millennial survey identified 73% of 19- to 39-year-olds as Amazon Prime members. Crucially for brands and competing retailers, Amazon is where many millennials begin when shopping. In CivicScience’s polling, 60% of 25-to-29s and 57% of 30-to-34s said it’s their starting point.

“It’s their No. 1 channel,” Driggs said. “It’s driven a lot by convenience—they really love convenience, and they love saving money.”

Convenience also amplifies the mobile aspect of millennials’ shopping. In May 2019 polling by Fluent for SmartWallet, 70% of respondents 25 to 34 said they prefer using their phone to redeem coupons and rebates. Mobile app usage is standard procedure. In a December 2019 eMarketer survey conducted by Bizrate Insights, about six in 10 US smartphone owners ages 18 to 34 reported using mobile retail apps to seek more information and transact purchases.

Social media figures into millennials’ shopping as well. In July 2019 polling by Adobe and Advanis, 63% of millennials (vs. 49% of Gen Xers and 33% of boomers) agreed that “there is a place for companies interacting with individual people on social networks, forums and/or messaging sites.”

On the downside, some millennials feel suspicious about brands’ usage of social media. That was evident in an April 2019 ThinkNow survey, where 34% of 23-to-38s said the phrase “I feel brands take advantage of me on social media” describes them at least somewhat, including 12% who said it describes them “completely.”

But millennials are aware of privacy issues, according to Ron Cohen, vice president of product strategy at Claritas, noting that “they’re perfectly willing to trade their privacy for anything of value, for free this or free that.” However, he also said this attitude changes “the minute you have kids. Then privacy becomes a concern. Maybe you have more to lose, or more to protect.”

To learn more about millennials as they move into a certifiably grownup life stage, eMarketer PRO subscribers can read our latest report: 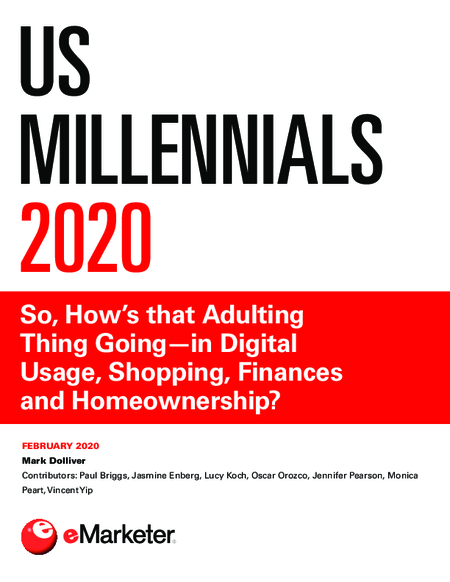