How the pandemic has affected Hispanics’ finances

The Hispanic population’s collective purchasing power is large and will get larger. But marketers can’t ignore the fact that many Hispanic consumers’ finances have taken a severe hit during the pandemic. A rebound to pre-pandemic conditions would still leave Hispanics with below-average income and wealth.

“Among the financial symptoms of the pandemic are struggles to handle routine expenses, including unignorable bills like rent and mortgage payments,” said Mark Dolliver, eMarketer principal analyst at Insider Intelligence and author of our recent report “US Hispanics in a Time of Pandemic.”

“And for a population that has suffered badly from the virus itself, the threat of medical bills looms large,” he said.

Averaged across waves of polling conducted during March to July 2020, Ipsos and Axios found 66% of Hispanic respondents worried about their ability to pay bills. In UnidosUS/Somos/Latino Decisions polling in August 2020, 64% of Hispanics said they were concerned (including 34% “very”) about their “ability to keep up with basic expenses.” Such worry has proven all too well justified. In the Census “Household Pulse Survey,” 9.4 million Hispanic households reported finding it “very difficult” to cover usual household expenses in the previous seven days, while another 9.5 million found it “somewhat difficult.”

Some surveys have examined ability to handle specific expenses. In polling conducted between July and August 2020 by Harvard’s T.H. Chan School of Public Health, NPR, and the Robert Wood Johnson Foundation, 32% of Hispanics reported “serious problems” paying their mortgage or rent. That’s consistent with The Economist/YouGov polling in August 2020, where 30% of Hispanics acknowledged having trouble paying rent, mortgage, utilities, and other housing costs. Keeping up with rent has been tough for young Hispanic adults, and 31% of 18- to 36-year-olds in GenForward’s June 2020 polling said the pandemic “made it challenging” to pay that bill.

Food costs have also been problematic. A May 2020 survey by the Urban Institute identified 27.1% of Hispanic households as “food insecure.” Northwestern University’s Institute for Policy Research analyzed May–June 2020 findings from the Data Foundation’s “COVID Impact Survey.” In that survey, 47% of Hispanic parents endorsed this statement: “The food that we bought just didn’t last, and we didn’t have money to get more.”

Despite the stereotype of Hispanics as urbanites, many live in suburbs and rely on cars to get around. This means car loan payments have been another pain point. In the Harvard/NPR/Robert Wood Johnson polling, 27% reported serious problems making those.

Then there are medical expenses. April 2020 polling by Hispanic digital media company H Code found 24% of Hispanic respondents saying they didn’t have “adequate healthcare to deal with potential issues caused by COVID-19.” The problem is especially threatening for households that have lost health coverage.

For more on how the pandemic has affected Hispanics’ finances, Insider Intelligence subscribers can read our recent report: 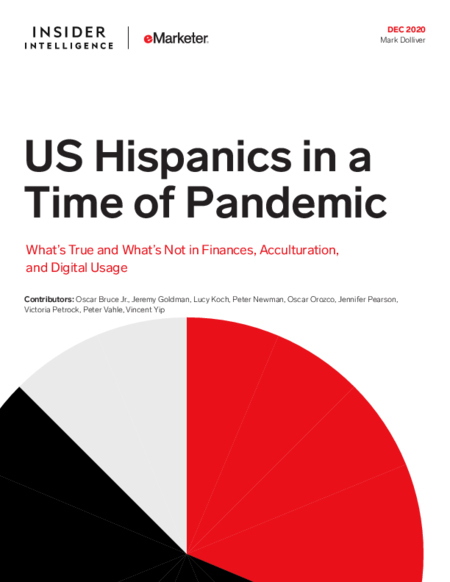 Report by Mark Dolliver Dec 23, 2020
US Hispanics in a Time of Pandemic

Article
US Hispanic's challenges with healthcare highlight an untapped opportunity for marketers, providers

Article
Hispanic Media companies woo advertisers, both at NewFronts and via acquisitions

Article
Hispanic consumers remain an underserved demographic for many marketers