In the UK, 10% of Campaign Spending Is Vulnerable to Ad Fraud

Every few months it seems another story emerges about ad dollars disappearing down a black hole of fraudulent activity.

With that level of spending, it’s only right that digital advertising gets more scrutiny and be held accountable for what it can deliver. Ensuring that an ad is served to a real person, that it is seen by that person and that it’s served in a brand-safe environment are the key concerns in the served ad journey.

If an ad isn’t making its way to a human actor, then two other major marketer concerns—viewability and brand safety—become moot. “Of the three fundamental pillars, you can argue that fraud is the most important and clear-cut,” said Harry Harcus, managing director of UK and pan-regional at Xaxis. “Ultimately, it’s a black-and-white issue. Fraud is a crime, and it’s a global industry problem. There's only one starting point, which is zero tolerance.”

From traffic fraud (boosting impression and click rates) through to practices such as domain spoofing or URL spoofing (in which falsified sites pose as legitimate publishers), fraud remains a significant problem for the advertising industry. According to a September 2017 press release, Juniper Research estimated that ad fraud would cost advertisers $19 billion globally in 2018, and $44 billion by 2022.

Our latest report, “Beyond Ad Measurement and Metrics: In the UK, Marketer Attention Turns to Engagement,” examines how the digital industry in the UK is working to ensure that marketers can trust the campaign-tracking metrics they receive—as well as the solutions that are being put in place to improve those measurements.

Various plans are underway that aim to improve the quality of the digital advertising ecosystem. UK advertiser advocacy group ISBA recently updated its Media Services Framework, which was “designed to help [advertisers] review, refresh and update [their] terms and bring added protection on a growing list of issues, including brand safety, ad viewability, ad fraud, auditing rights and data ownership.”

The IAB Tech Lab’s ads.txt initiative also continues to be honed. The initiative, which launched in May 2017, is described by the industry body’s technology division as a “simple, flexible and secure method that publishers and distributors can use to publicly declare the companies they authorize to sell their digital inventory.” In May of this year, the “ads.txt aggregator” was launched. This service provides daily updates on publishers’ approved ad sellers, making it easier for marketers, agencies and platforms to eliminate fraudulent inventory sources and fight against domain misrepresentation, according to IAB.

Subscribe to the "Behind the Numbers" podcast on SoundCloud, Apple Podcasts, Spotify, or Stitcher.

UK Analyst Bill Fisher talks about the difficulties of measuring digital ads across the pond. He also discusses how digital campaign success is currently measured and what metrics brands are turning to beyond clicks and impressions. 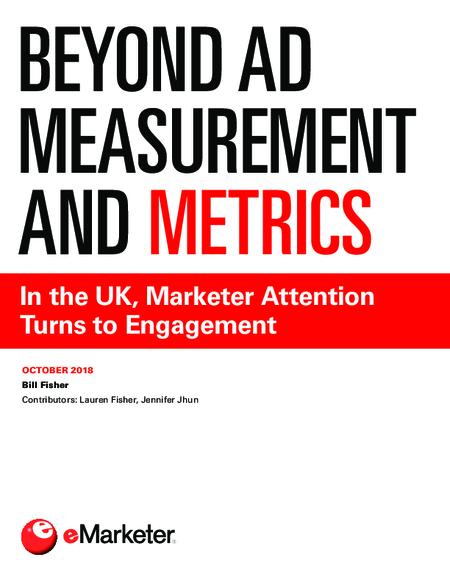 Report by Bill Fisher Oct 22, 2018
Beyond Ad Measurement and Metrics

Article
How the pandemic changed marketing for McDonald’s

Article
How to build a resilient marketing strategy | Sponsored Content