In Two Years, Users in Canada Will Spend More Time with Mobile than TV

Time spent with mobile among internet users now accounts for almost 3 hours daily in Canada. By 2020, mobile time spent will exceed TV. For advertisers, the emergence of mobile devices as dominant media consumption tools is leading to mobile-first marketing and sometimes mobile-only media buying. In 2018, more than one-third of all advertising dollars in Canada will be spent in mobile channels.

This year, mobile ad spending has surpassed the CA$5 billion mark, up 37.5% over 2017. Mobile display advertising continues to mature, with more than three-quarters (75.1%) of all display advertising now spent in mobile formats. Mobile social and search lead the way in terms of attracting mobile ad dollars, but new channels including messaging and gaming have begun to deliver results for advertisers.

Consumers in Canada spend 2 hours, 54 minutes on smartphones, feature phones and tablets daily, not including voice activities. There, 85% of online mobile time is spent in apps vs. the mobile web, a rate similar to the US (88%) and the UK (83%), and some countries even report app time shares in excess of 90%. Most of this time is occupied by apps under the corporate umbrellas of Facebook and Google. Internet users in Canada spend an average of 57 hours monthly with mobile apps, compared to 11 hours with the mobile web.

“The majority of mobile apps are deleted within the first 30 days,” said Jed Schneiderman, president of Tapped Mobile. “It's really hard to get on the phone and be part of a consumer's life, given the dominance of Facebook, Google, Amazon and Apple. Our attention to the apps that these four companies produce is becoming a bigger share of where we spend our mobile time online.” 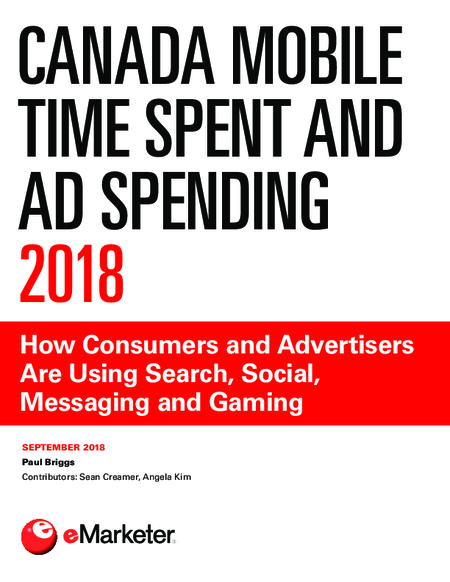 Subscribe to the "Behind the Numbers" podcast on SoundCloud, Apple Podcasts, or Stitcher.

Canada analyst Paul Briggs talks about how mobile is establishing itself in Canadian's lives and how advertisers are reaching people through this very personal medium. Paul also discusses some of the continuing challenges of advertising on mobile in Canada.