iPhone 12 will supercharge mobile AR in 2021

The iPhone 12 Pro became the first phone to have a back-facing Light Detection and Ranging (Lidar) camera, which enables more sophisticated augmented reality (AR). (Top-end Android phones use a similar Time-of-Flight, or ToF, sensor.) Lidar can near-instantaneously detect depth and size, allowing for rapid and very detailed mixed reality functions for apps, such as furniture placement or full-body Snapchat Lenses. This should supercharge mobile AR spending and make such ads more feasible.

Before the iPhone 12 was released, AR advertising grew from about half a billion dollars in global revenues in 2019 to $1.41 billion this year, according to information from AR research firm ARtillery Intelligence. Driven by social media advertising, such as Snapchat Lenses—and strong results for brand advertisers—that figure should surpass $8 billion by the end of 2024.

By reducing the effort needed to measure the spatial dimensions of a room and place objects at the right scale in the right place, Lidar makes AR more accessible. “It’s going to be able to create these experiences that don’t require much of the user to jump through all those hoops, which I think is going to be required to get AR closer to the mainstream,” said Michael Boland, CEO and chief analyst at ARtillery Intelligence. “It’ll allow what we’ve seen so far with the front-facing camera, and the success we’ve had with social selfie lenses, to now expand to a broader canvas.”

Beyond social media and the potential for Lidar, AR advertising is set to grow. Consumers are beginning to see ads that include AR features, such as an option for a user to test a lipstick or insert a car into a picture.

“AR is early, and there is a lot of growth opportunity,” said Stephen Upstone, founder and CEO of video advertising and optimization platform LoopMe.

Lastly, visual search lets users identify items or places with their camera and offers information or links. In October, Google stated that its visual search tool, Lens, could identify 15 billion objects, up from 1 billion two years ago. It has not announced any visual search ad products and is unlikely to do so in 2021, but those features will arrive once visual search becomes more established. Some may incorporate AR elements in the future, such as ratings for businesses along a streetscape.

This is just one of our 10 mobile predictions for a (hopefully) post-pandemic year. Insider Intelligence subscribers can read them all in our recent report: 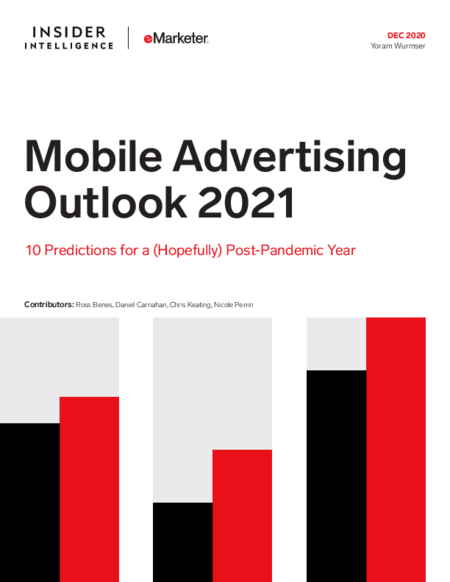