In a letter to Amazon employees published Tuesday afternoon, Jeff Bezos announced that he would step down as CEO and transition to executive chairman, where he'll focus on "new products and early initiatives." Andy Jassy, who is currently CEO of Amazon Web Services, will replace him.

"Jeff Bezos really knows how to go out on a high note, and the news of his stepping down from the CEO role will certainly overshadow what was a truly historic quarter," said Andrew Lipsman, eMarketer principal analyst at Insider Intelligence.

"Amazon's huge topline performance in Q4—bolstered by Prime Day in October, a massive holiday ecommerce season, and surprising international strength—may obscure the more important story of Amazon's surging ad business. Two consecutive quarters of huge bottom-line beats in the face of rising operational costs and softening AWS growth points to a much more profitable ads business than previously appreciated. Plenty of runway for that business to keep scaling over the next several quarters signals major margin expansion ahead."

Amazon's global ad business will grow by over 30% this year to $23.04 billion. That gives Amazon a 5.8% share of total global digital ad spending.

The ecommerce giant's worldwide mobile ad spending will increase by 41.3% this year.

To hear more from Andrew about holiday shopping results, check out our recent podcast episode: 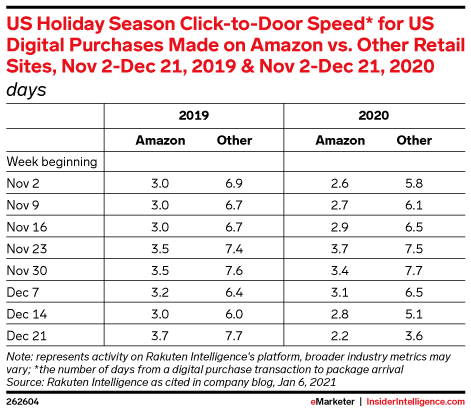 Article
Stitch Fix is all dressed up with nowhere to go