A global rise in mobile payments holds true in the mature UK, Canadian, and Chinese markets, where near-universal smartphone and banking penetration make mobile payments accessible to large swaths of consumers. However, growth rates vary in each market, which is pushing providers to get creative in attracting new users and increasing engagement. At the same time, they must contend with shifting consumer habits, changing regulations, and mounting competition.

In the UK, we forecast mobile proximity payment adoption will rise from around one-fifth this year to nearly a quarter in 2025. And adoption of mobile peer-to-peer (P2P) payments (which are typically housed in banking apps) will increase from about one-third to just under 40% in the same period as the sector saturates smartphone banking users. Wallet providers are working to pull UK consumers from contactless physical card payments and cement users who moved away from cash during the pandemic.

In Canada, mobile proximity payment adoption will tick up from 25.1% this year to 28.1% through 2025. Mobile P2P adoption—also often bank-based—will grow from just under a third of Canadian consumers this year to 36.0% in 2025. In a market where customers love existing payment methods, including contactless physical cards and dominant Interac e-Transfer, mobile wallet operators are attempting to lure customers with fresh use cases.

And in China, mobile proximity and mobile P2P adoption are on near-identical trajectories, inching up from just over 6 in 10 users this year to around two-thirds in 2025. An Alipay-WeChat Pay duopoly has made mobile payments the country’s top payment method, especially in urban areas. 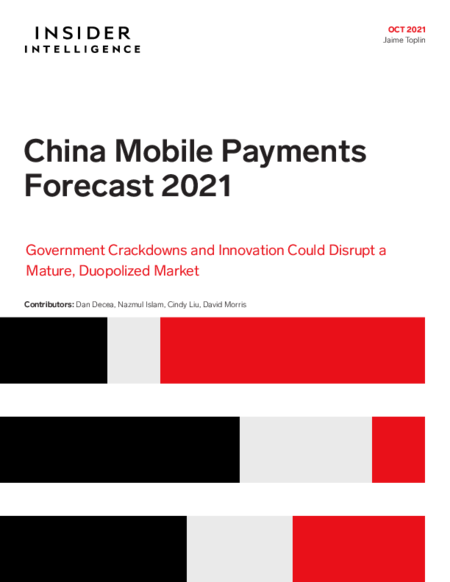 Article
Can Meta transform WhatsApp into a super app?

Article
Where does Klarna go after its user boom ends?