In gaming, mobile phones are the No. 1 device by a long shot

Learn about PRO   |   Login
Download
In gaming, mobile phones are the No. 1 device by a long shot
Share
Topics
Video Games
United States

The coronavirus pandemic led to heightened gaming usage and viewership of gaming video content in 2020, with mobile phones being the most popular device for gaming in the US.

We expect there will be 159.1 million monthly mobile phone gamers in the US this year, up 1.2% from 2020. That’s 89.5% of all US digital gamers, making mobile phones the leading device by a significant margin.

Mobile gaming is popular because of its ready availability. Most consumers own a mobile phone, while not as many own consoles. And many popular mobile games have low entry points, as they are based on familiar genres like puzzles and card/casino games. Then there is the obvious reason that mobile games can be played anywhere, which makes them more accessible than similar games played on computers. This is partly why we expect the number of monthly mobile phone gamers will increase slightly in 2021, while the number of desktop/laptop and tablet gamers will decrease slightly. Even as the pandemic subsides, there will still be reasons for consumers to play mobile games as they begin to commute and travel once again.

Due to mobile gaming’s approachability, its audience tends to skew slightly older compared with digital gamers overall. In 2020, a good portion of mobile gaming growth came from older users who turned to gaming for the first time in order to entertain themselves and connect with others during the pandemic.

An October 2020 survey by market research company The NPD Group and Sensor Tower found that the number of mobile gamers (using either smartphones or tablets) in the US and Canada who were ages 45 and older grew by 17%, while the number of those ages 25 to 44 grew by 13%—the two highest growth rates across all age groups.

The combination of new mobile gamer growth and increased activity from current gamers caused time spent with mobile gaming to rise significantly during the pandemic. We estimate that US adults spent an average of 27.3 minutes with mobile gaming apps per day in 2020, up 16.8% from 2019.

Time spent with mobile gaming apps will decrease by 2.2% this year, falling to an average of 26.7 minutes per day. Nonetheless, average time spent will be much higher in 2021 than it was in 2019 (23.4 minutes per day).

Overall, the slight increase in monthly users in 2021, despite the slight decrease in time spent, bodes well for mobile gaming. It indicates that many consumers who began playing mobile games during the pandemic will continue to play even as the pandemic subsides, albeit somewhat less frequently than they did when facing pandemic-related restrictions.

To learn more about consumer usage and viewership across the gaming landscape, Insider Intelligence subscribers can read our recent report: 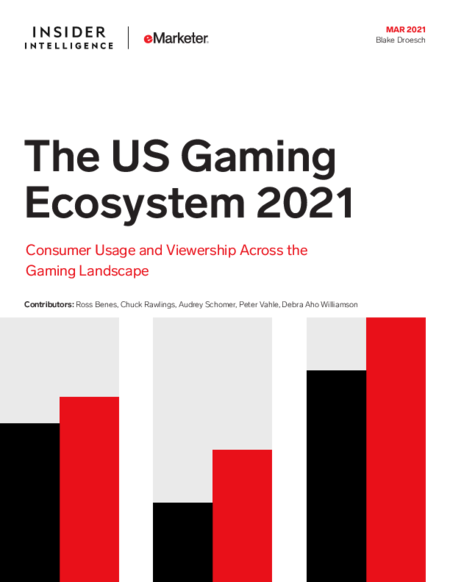 Article
The future of video games will be streaming

Audio
The Daily: A new (OOH ad) normal, watching 4 channels at once, and Netflix gamers

Audio
The Daily: Why Spotify is cautiously optimistic, does Netflix need games, and why folks buy smart ...

Article
Netflix is only the beginning for Microsoft’s advertising blitz

Audio
The Weekly Listen: The problem with media, how TikTok is taking on TV, and buying your next car ...