Americans are spending less time with most major media, with one major exception: smartphones.

For an in-depth look at eMarketer's mobile time spent forecast, including app time vs. mobile web, and time spent per app activity, eMarketer PRO subscribers can access the report below. 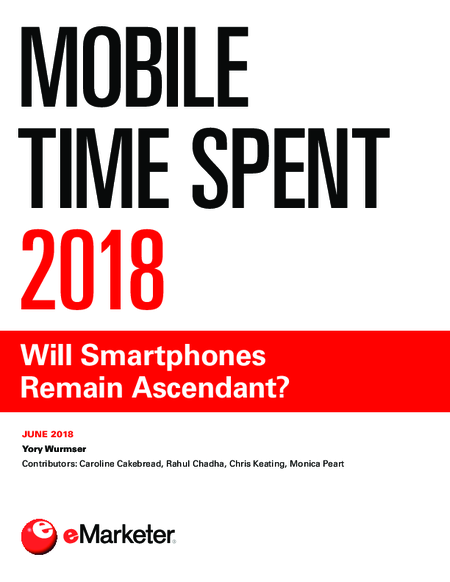 Time spent on mobile, however, is likely approaching a peak, and within a few years, we believe we’ll start to see it plateau.

Several trends on the horizon could put a stop to mobile time's seemingly inexorable rise. A slew of newer device categories, such as smart speakers, smart cars, wearables and VR headsets, might dent time spent.

At the same time, there is a growing backlash against the overconnected lifestyle. We are already seeing a decline in time spent with tablets, which reached an inflection point in 2016, when US adults averaged 70 minutes using them. That average has since dipped about a minute to 68.7, and this gentle downward trend is set to continue for the next few years.

Just as bigger and better smartphones decreased tablet minutes, newer devices, such as smart speakers, may replace smartphones for some tasks. We estimate that more than a third of millennials will use a smart speaker at least monthly in 2018, as will roughly a quarter of Gen Xers.

That isn’t to say the importance of mobile devices will diminish. They will sit at the center of all of these devices and connect with them. But future consumers will have a more varied set of digital interfaces.

Article
Time spent with media to slump in US and Canada, but digital formats will grow

Report
US Time Spent with Media 2022

Article
YouTube is no longer a mostly mobile platform