Social media memes have been around for over a decade, but the last twelve months have solidified their position as a staple of digital communication. First came the World War III memes, in response to the possibility of a war between the US and Iran. Soon after, the pandemic led to an explosion in memetic content and consumption across social media. And then there was “Chairman Sanders,” a viral meme born out of a photo of Sen. Bernie Sanders at President Joe Biden’s swearing-in ceremony last week.

While the topics themselves are no laughing matter, lighthearted humor about shared struggles has become a coping mechanism—or simply a much-needed distraction—for many.

Data on the total number of meme consumers is sparse, however.

One of the most recent stats is from a GlobalWebIndex survey conducted in late March 2020, which showed that 32% of US and UK internet users had looked at a meme on the day they took the poll.

That made looking at memes the sixth-most cited digital activity of the 20 included in the survey, behind searching for coronavirus updates (68%), listening to music (58%), watching movies or shows (49%), watching funny videos (42%), and playing games on mobile (40%).

Among respondents 16 to 23 years old, looking at memes was the No. 3 activity, with 54% having done so on the day of the survey. Only listening to music (71%) and searching for coronavirus updates (67%) had higher response rates.

A May 2020 survey by We Are Social and GlobalWebIndex looked at how often internet users in the US and UK shared memetic content on social media. It found that memes were the third-most popular type of content to share, cited by 29% of respondents, behind only personal news (40%) and funny videos (36%). What’s more, 44% of those ages 16 to 23, and 34% of those ages 24 to 37, said they were sharing more memes than they were previously.

As evidenced by “Chairman Sanders,” the US presidential election has been another catalyst for meme usage. According to a September 2020 study by The Harris Poll and Fast Company, for instance, 55% of US adults reported they had shared a political meme in the previous three months. Of those respondents, 54% said they were sharing more memes than they were one year prior.

Of course, some of the increase in meme engagement is simply due to the fact that people have been spending more time on social media in general than they were before the pandemic. Our latest forecast shows that average daily time spent on social networks by US adults rose by 16.4% last year, to just over 1 hour, 5 minutes per day. (We expect that in 2021, that figure will fall slightly, by about 36 seconds.)

But since memes also tap into several of the trends that the pandemic has accelerated—from the growth in user-generated content and influencer marketing, to “making social media fun again” through social entertainment—it’s likely that memes will continue to flood many social feeds in 2021 and beyond. It’s also likely that we will continue to see memes migrate from social platforms to other media channels, like TV and newspapers, and into marketers’ media plans.

To learn more about how marketers can leverage memetic media in 2021 and beyond, Insider Intelligence subscribers can read our recent report: 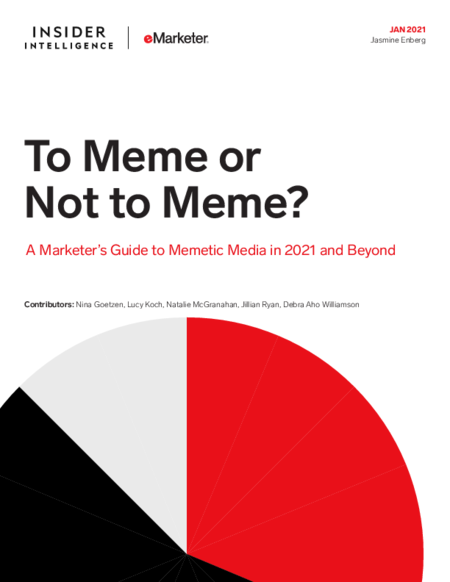 Article
How to elevate a luxury brand

Article
Incentivizing the transition to EVs