People Continue to Rely on Maps and Navigational Apps

Maps and navigation apps are essential tools for smartphone users, and we forecast that 66.8% of smartphone users will use them monthly, with a growth of 5.8% from 2017 to 2018. More than 155 million people will use maps and navigation apps by the end of this year. We expect that growth will remain steady in the coming years, and penetration will reach 67.6% by 2021.

Though not the flashiest of apps, maps and navigation apps are a fundamental part of the smartphone user experience, and tech companies recognize this and regularly invest in improving their map capabilities. Making a big push to upgrade Apple Maps, Apple announced in June 2019 that it plans to roll out an improved app later this year on iOS 13. Google continues to regularly add features to its Google Maps app, the latest being a feature that alerts users of live traffic delays for buses and predictions on transit congestion.

For a company like Google, which runs ads within the app, it also means opportunities to capitalize on people’s reliance on this tool through advertising.

“Although advertising is still limited, maps have a lot of potential as ad platforms," said Yorum Wurmser, principal analyst at eMarketer. "Users go into these apps often with search queries, which reveals intent and provides possibilities for search ads. Google already has some ads within Google Maps and Waze."

Google Maps is the No. 4 smartphone app among US smartphone users, coming just after YouTube, Facebook and Google, according to March 2019 figures from Comscore. Nearly 64% of Android and iOS smartphone users utilize the map app.

At its Worldwide Developers Conference, Apple said that its upgraded maps app will feature improved map data, real-time transit and flight info and favorites and collections. Apple’s native map app has been perceived as an inferior map tool to Google Maps for years, riddled with bugs and stability issues. Last year, it suffered an outage that rendered its app unusable for hours to millions of people, losing users to Google and Waze during this period.

“With all the locale and user interest data Google has, it can create personalized recommendations for Map users which would incentivize businesses to pay to be a part of that list,” said Nazmul Islam, junior forecasting analyst at eMarketer.

For further analysis on how maps and navigation apps are becoming more accessible to advertisers, eMarketer PRO subscribers can read our recent report: 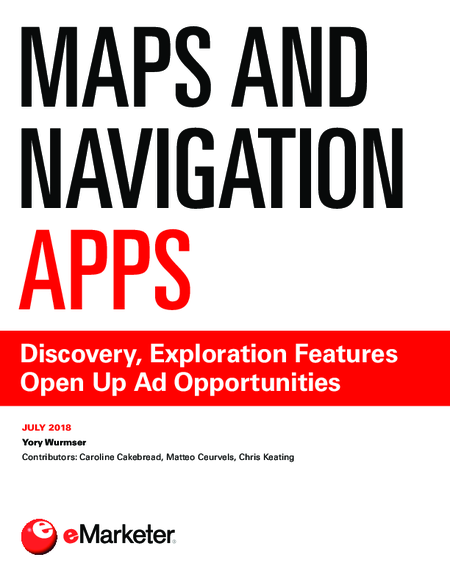 Article
Apple will soon bring ads to its Maps, Books, and Podcasts apps