In our first-ever forecast for Prime Day, we expect that Amazon will generate $9.91 billion in sales worldwide, including $6.17 billion in the US.

Despite an uncertain economy, consumers will continue to spend heavily on ecommerce and actively seek deals heading into the holiday season.

“While demand will be strong, the event will be more difficult to plan for than in previous years,” said Andrew Lipsman, eMarketer principal analyst at Insider Intelligence and author of our recent report “Amazon Prime Day 2020.”

“Since Prime Day’s 2015 debut, Amazon has expanded the scale and spectacle of the event in a mostly predictable fashion,” he said. “The generally incremental changes from year to year gave customers and sellers a better sense of what to expect, with Lightning Deals and heavily discounted Echos and Fire TVs taking center stage. Sellers developed a playbook for their promotions and advertising strategy and could plan their inventory accordingly.”

But the pandemic has thrown everything for a loop. Supply chains are challenged, inventory forecasting is unpredictable, and consumer demand is fluctuating wildly. Amazon’s decision to move Prime Day from mid-July to October has only thrown a bigger wrench into seasonal spending patterns, leaving retailers and sellers awash with uncertainty.

A late March 2020 survey from Profitero found that 37% of digital retailers worldwide felt that their Prime Day 2020 plans were up in the air due to the coronavirus. At the same time, 56% were optimistic that Prime Day would be a winner given the expectation of more consumers shopping online.

That expectation appears to match consumers’ realities. An August 2020 poll from researcher Piplsay found nearly half (48%) of US consumers budgeting to spend the same or more than last year on Prime Day compared with just 31% planning to spend less.

To maximize sales on Prime Day and in its aftermath, Amazon needs flagship products that generate excitement and promotions tailored to customers’ changing lives amid the pandemic. Amazon did not disappoint on the new product front, unveiling an array of new Alexa-enabled devices and upgrades to existing products at a September 24 event. Among the highlights were a revamped Echo, Echo Dot, and Echo Show, and a Ring home security drone. Not all products unveiled at the event will be available for Prime Day, but it appears that some will.

As for non-Amazon products across other categories, one can expect that heightened pandemic demand for elearning, in-home entertainment, cooking, and sanitation products—once mundane SKUs—will resonate in a way they never would have previously.

For more on how Prime Day 2020 will be different, and how marketers should prepare, eMarketer PRO subscribers can read our recent report: 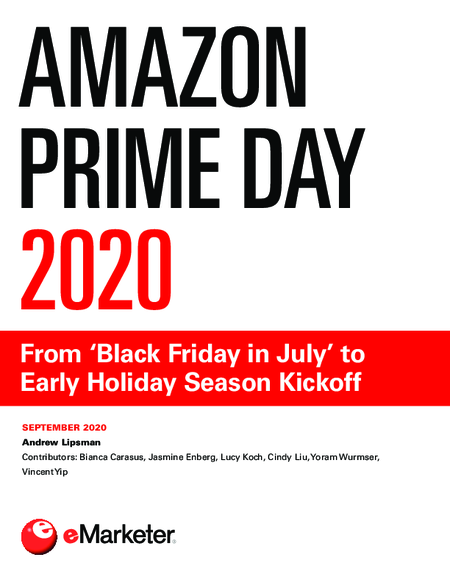