A rapidly surging market for US digital retail media

US digital retail media ad spending will reach $61.15 billion by the end of our forecast period in 2024. This is nearly triple the 2020 figure of $20.81 billion and represents a compound annual growth rate (CAGR) of 30.9% in that four-year span.

The projection of $61.15 billion also puts retail media in the same ballpark as traditional TV, which will reach $67.17 billion in 2024. Given the upward trajectory of retail media and the gradual decline of TV, it seems only a matter of time before retail media becomes the bigger of those two ad markets in the US.

It should be noted that our current outlook for digital retail media ad spending, while robust, is slightly lower than what we previously expected. Back in October 2021, we projected spending of $52.21 billion for 2023, compared with our current estimate of $51.36 billion. The reason for this reduction of about $850 million—or 1.7% of the previous total—is twofold: negative impact from supply chain disruptions (analyzed later in the section on market conditions), and new visibility into Amazon’s and Walmart’s ad revenues from their quarterly earnings.

Retail media ad spending tracks closely with its largest subset: ecommerce channel ad spending. The latter category will be robust over the coming years, growing at a CAGR of 29.0% from 2020 to 2024, when spending will hit $52.63 billion. 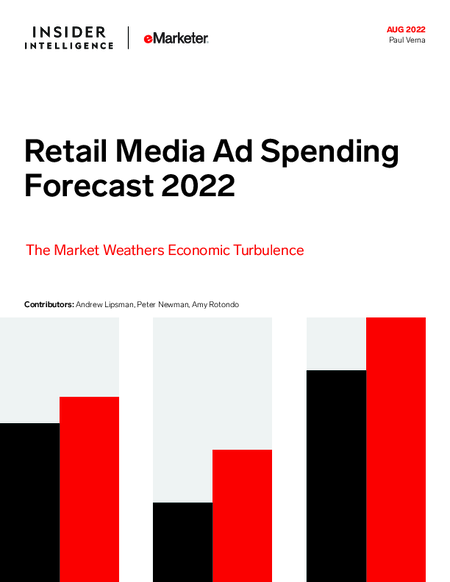