Many have embraced social channels to engage younger consumers

Brands have sought after millennials since the segment was identified as a demographic phenomenon reminiscent of the boomers. There’s been heavy investment in the creation of products and services that fit within an evolving consumer culture, one increasingly defined by this influential cohort. Growing independence and earning make this group the most digitally connected of all.

“By and large, millennials are the demographic brand marketers want to talk about the most,” said Kristin Wozniak, vice president of analytics and insight at Cossette Media, who was interviewed for our recent report, “Canada Digital Habits by Generation: Identifying Key Distinctions Across Age Groups, from Teens to Baby Boomers.”

Our 2020 estimates for millennials show penetration rates exceeding 90% of the population across several forecasts, including digital video and social network usage. For internet and smartphone use, this age group is almost fully saturated at 99.0% and 98.4%, respectively.

More than one in five of those ages 18 to 34 surveyed by Forum Research in June 2019 said they spend more than three hours with social media each day. And social media is proving to be an outlet for millennials’ expression of culinary interests, posting photos of dishes, even if it’s as lowbrow as fast food. Whether for pickup or delivery, using a smartphone or tablet is far more common among the 18-to-34 age group, according to February 2019 data from Restaurants Canada and BrandSpark. Almost half of these users—46% for pickup and 44% for delivery—did so, significantly higher than older age groups.

“There's certainly a lot more hunger for demographic data among our member base,” said Chris Elliott, senior economist at Restaurants Canada. “Younger Canadians are really changing the landscape of the food service industry. The young are changing the way people could dine out, what's on the menu—including plant-based items—how they interact with restaurants and the rise of third-party delivery.”

The third-party aggregators like Uber Eats, SkipTheDishes and DoorDash are being driven upward by the 18-to-34 segment primarily. The Restaurants Canada/BrandSpark data shows that 23% of 18-to-34s used such an app at least once a month compared with 8% of those ages 50 and oolder.

Social media marketing tactics are helping to level the playing field for smaller restaurateurs who traditionally have had trouble competing with large quick-service restaurant (QSR) chains and their marketing budgets.

“Eighteen- to 25-year-olds are the most frequent users of social media sites like Facebook and Instagram to interact with restaurants,” Elliott said. “That's in large part leaving reviews and tagging photos. A lot of them are following restaurant activity through Instagram and Twitter.”

QSRs like Wendy’s and Arby’s have embraced their social channels to engage younger groups with irreverent and funny posts that are easily shareable. Instagram and Snapchat have proven to be the top platforms for posting food-related content, according to the experts interviewed for this report.

“Snapchat's perhaps not as relevant as it once was with the popularity of Instagram Stories,” said Jo-Ann McArthur, president of Nourish Food Marketing. “Because that generation [millennials] lives on their phone, they're not necessarily going into QSRs either. It's being delivered to them.”

The digital preferences of this age group are affecting how creative is being designed for campaigns across digital platforms. “We do a lot more video, including shorts and longer-form video,” McArthur said. “It's increasingly a ‘show me’ vs. a ‘tell me’ society, which means creative is definitely more visual than it used to be.”

For more information about how different age groups interact with media in Canada, eMarketer PRO subscribers can read our latest report: 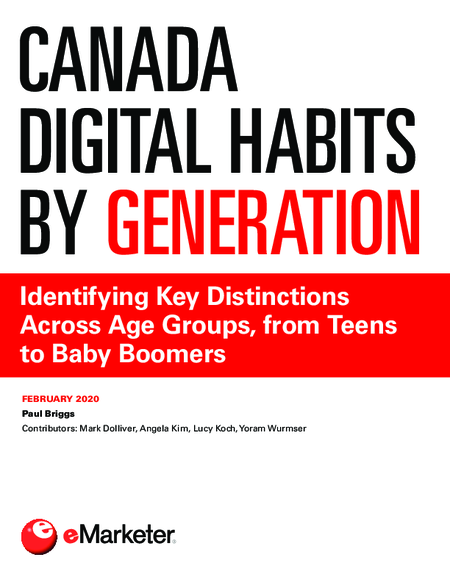 Article
Inflation takes a bite out of plant-based meat sales

Article
Drizly looks to capitalize on the retail media boom

Article
As Instacart looks to expand its services, it takes steps to retain talent

Report
How Economic Stress and Inflation Are Changing Consumer Behaviors

Article
The return of the office

Article
The state of US household spending

Article
The biggest social commerce influences on each generation