One of the biggest drivers for proximity mobile payment growth is the ever-expanding footprint of stores accepting payments. According to Apple, 74 of the top 100 retail chains accepted Apple Pay as of January 2019, and more have joined since then.

But not all merchants warmed to the technology right away. “Retailers in the US were ambivalent about the rise of Apple Pay and other mobile payment platforms, fearing the loss of data and infrastructure costs that would be necessary to implement proximity mobile payments,” said Yoram Wurmser, eMarketer principal analyst and author of our recent report, “US Mobile Payment Users 2019: User Growth Slows, but Transaction Volume Surges.”

“This led many of the largest retailers to form a consortium that built its own mobile payment system [Merchant Customer Exchange, or MCX] and would use existing point-of-sale [POS] systems,” he said. “To shift consumers to MCX, these retailers refused to accept Apple Pay and other players. Despite these efforts, MCX went nowhere, and most retailers now accept Apple Pay—including Target, which began accepting it in early 2019.”

Walmart remains a major holdout, as the company seems to be committed to its proprietary mobile payment system Walmart Pay. With its vast customer base, Walmart Pay should continue to be a major mobile payments platform. And it’s not the only one: Other retailers are also introducing or further developing payment platforms within their apps, including Kroger, Dunkin’ and McDonald’s.

Dunkin’s mobile loyalty program DD Perks, for instance, has 12 million users—most of whom take advantage of the mobile payments option, which is based on QR codes like Starbucks. The app also includes a call-ahead ordering option called "On-the-Go Mobile Ordering," though we would not define it as a proximity mobile payment. To continue attracting new members, the app offers rich promotions, in-store activations and digital media, according to Stephanie Meltzer-Paul, vice president of digital and loyalty marketing at Dunkin’ US.

The majority of US small businesses have yet to accept digital wallets or proximity mobile payments. A May 2019 Bank of America Merchant Services survey conducted by Forrester Consulting found that only 42% of US small business accepted mobile wallets, compared with 90% that accepted credit cards. “It takes time to turn over the acceptance infrastructure,” said Thomas Olsen, partner at Bain & Company. “That costs money, and each individual location has to make the choice when they want to update.”

That may be changing, however, as businesses slowly upgrade their POS systems to newer models with NFC capabilities and gain a greater realization of the benefits. The Bank of America survey found that 65% of respondents said that digital wallets could help their business by making checkout more convenient.

For further analysis on our US proximity mobile payment and peer-to-peer payment forecasts, eMarketer PRO subscribers can read our report: 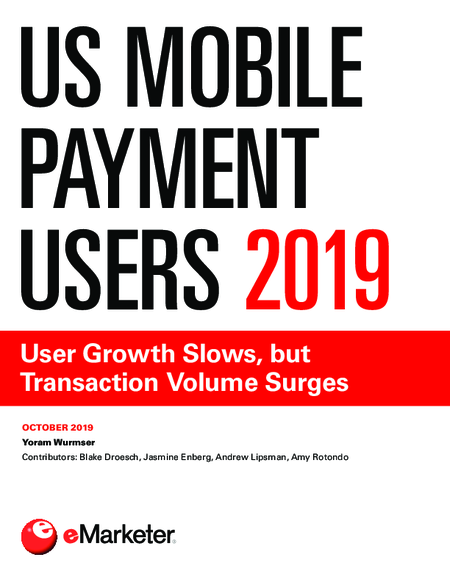 Article
Can Meta transform WhatsApp into a super app?