For Gen X, retirement both beckons and threatens during the pandemic

Gen Xers will be ages 41 to 56 in 2021, making the oldest of the cohort within sight of retirement—or, at least, within sight of an age at which they might like to retire. Whether they’re saving enough to make retirement feasible is another matter, especially given the pandemic. (Throughout this article, we note the varying Gen X age brackets employed by surveys we cite.)

According to its polling in Q4 2019, the Transamerica Center for Retirement Studies (TCRS) estimated a median figure of $64,000 for total retirement savings in US households headed by Xers (then ages 41 to 54)—not nothing, but not enough to generate much income. Just 25% of Xers reported having $250,000 or more in retirement accounts. An April 2020 supplement to that polling found 26% were not saving for their retirement at the time.

Plenty of Xers worry about having enough saved for retirement. The Q4 2019 polling by TCRS found 41% afraid of outliving their money. Just one-third of Xers (ages 40 to 55) in Morning Consult’s August polling rated their saving for retirement as “on track.”

Tight budgets are the obvious obstacle, but not the only one. “A lot of it has to do with time,” said Kristi Rodriguez, senior vice president of the Nationwide Retirement Institute at Nationwide Financial. “They are truly in the middle of their prime working years. They’re trying to take care of their adult children and sometimes younger children. They’re also taking care of individuals older than them.” Retirement preparation can fall by the wayside.

The pandemic hasn’t helped matters. A July report by the Center for Retirement Research at Boston College assessed the proportion of working-age Americans “at risk of being unable to maintain their pre-retirement standard of living.” The “at risk” figure for 40-to-49s rose from 51.7% to 55.3% after the “employment shock” of the pandemic. For 50-to-59s, it rose from 44.2% to 51.0%. In July polling for Northwestern Mutual, 25% of Xers said the pandemic had prompted them to push back their planned retirement age.

For some, the pandemic has had the salutary effect of increasing a sense of urgency about saving for retirement. Of course, there are wide disparities among different income levels in Xers’ ability to save for retirement. And money put aside may not stay there. Many Xers have raided their retirement accounts to cover current expenses during the pandemic. In MagnifyMoney polling from April and May, 40% of Xers (ages 40 to 54) reported doing so. Less drastically, 13% had “paused” their contributions and 23% had reduced them. In a November survey by The Harris Poll, 36% of 35-to-49s reported having stopped or reduced their saving for retirement.

Workers with inadequate retirement savings talk of finessing the problem by working in their retirement years. In July polling by Ipsos for Voya Financial, 60% of employed Xers said they “plan to work in retirement as a result of the pandemic.” This is hardly a reliable plan, though, as many people end up involuntarily retired, often due to job loss or health problems. “The reality is, at some point you don’t necessarily get a choice,” said Jim Miller, vice president of banking and payments intelligence at J.D. Power. “If you lose your job in your early to mid-60s, getting another job that makes a meaningful difference replacing that income is very challenging.”

To learn more about how Gen X’s finances, shopping behavior, and digital usage look amid the pandemic, Insider Intelligence subscribers can read our recent report: 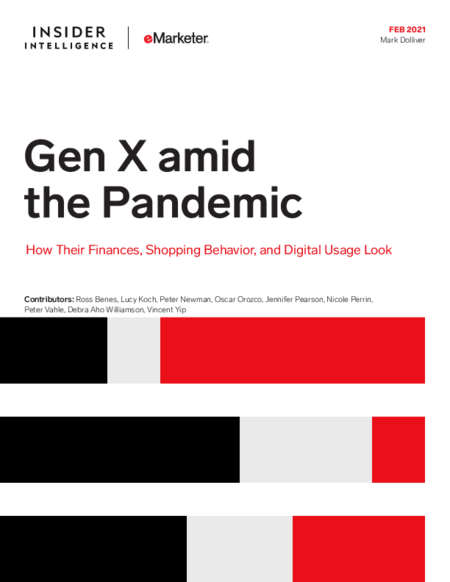 Report by Mark Dolliver Feb 02, 2021
Gen X amid the Pandemic