Long-form video is spreading across social media. With the June 2018 launch of IGTV, Instagram joined Facebook, Snapchat and Twitter in a space getting more crowded by the day. Some marketers are placing pre-roll and mid-roll ads in social shows, but the audiences are small and the measurement capabilities are limited.

Social shows may appeal to certain demographic groups more than others. About half of social media users ages 18 to 24 said they are interested in watching TV shows on social platforms.

eMarketer’s latest report, “Video Ads in Social Media 2018: Shows are Everywhere on Facebook, Instagram, Snapchat and Twitter—But Are People Watching?” explores how the social platforms are getting serious about TV-like shows. The report looks at what’s driving Facebook, Instagram, Snapchat and Twitter toward this form of video—and what advertisers need to know.

One key reason the social platforms are moving in this direction is the desire to tap into the digital video viewing audience. This year we estimate nearly 70% of the US population will watch digital video (either via streaming or downloading) at least once a month, amounting to nearly 230 million people.

Mobile viewing is also continuing to grow; in the US, four in five digital video viewers will use a mobile device to watch video on a monthly basis this year.

Another reason is a desire to woo creators. After seeing the success YouTube has had by working with these social influencers, Instagram put creators front and center in its launch of IGTV. Snapchat is wooing creators with revenue sharing deals, announcing at the June 2018 VidCon conference that it was creating programs to compensate creators for shows, including sharing ad revenue. Facebook has also begun to offer more tools to allow creators to showcase their videos.

But these are still early days for the social platforms’ video efforts. In the year since Facebook launched Watch, its home for long-form video, it has learned that two types of shows work best: big, buzzy productions featuring well-known celebrities and smaller, niche shows that appeal to a target audience. Shows that are in between tend to fare less well. The May 2018 premiere episode of “Red Table Talk,” a talk show featuring actress Jada Pinkett Smith and her daughter, has had 28 million cumulative views as of early August. A few subsequent episodes have had view counts above 20 million.

Others have not shown the same sustained buzz. A teen-oriented show, “Skam Austin,” based on a popular series from Norway, integrates Instagram into the action. The characters post to Instagram accounts, sometimes providing clues to the mystery at the center of the show. The premiere episode has had 14.1 million views as of early August, but the second episode (which came out a week after the premiere) has just 4.3 million views. 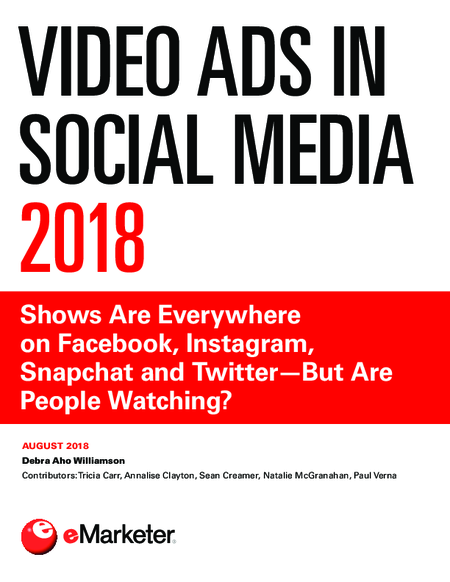 In the latest episode of “Behind the Numbers,” eMarketer analysts Debra Aho Williamson and Paul Verna explore the reasons social video is growing, and explain what marketers need to know about advertising on social shows.