Social platforms are starting to resemble each other

What does that mean for marketers?

Article by Jasmine Enberg  |  Jan 5, 2021
Download
Social platforms are starting to resemble each other : What does that mean for marketers?
Share
Topics
Mobile Social Media
Worldwide

Never in the past two decades of social media history have the features, ad formats, and other business initiatives of the four major social platforms looked as similar as they do today. But they don’t just look alike—many of the social platforms’ new offerings are a nod to TikTok, 2020’s breakout social star.

That’s a major shift from previous years when the social networks tried to attract audiences by differentiating themselves. Remember when Twitter started calling itself a news app in 2016? It even went so far as to remove its app from the social network category in mobile app stores and place it in the news section.

That’s not to say the social platforms haven't ever taken pages out of each other’s playbooks: Instagram “stole” Stories from Snapchat in 2016 and arguably made the format more successful. Flash forward to today, and Facebook has integrated a Stories-like feature into all of its apps, including WhatsApp and Messenger, and Twitter now has its own disappearing photo and video feature, Fleets.

But while the shift may have been in motion before 2020, the pandemic has greatly increased the speed at which these changes are happening. As the pandemic propelled social media usage—particularly on TikTok—and temporarily slowed ad spending, Facebook, Instagram, Snapchat, Twitter, and others quickly rolled out new services to retain users and diversify their revenue streams.

The result? A new social media world order where the platforms have more in common than not.

In 2021, marketers can expect the social properties to start streamlining their services as they figure out what works and what doesn’t. Not every feature will be successful on every platform, as their user bases and value propositions will remain different. Do Twitter users really want—or need—ephemeral content the way Instagram or Snapchat users do? Probably not. Will Instagram users adopt TikTok-like short videos? All signs point to yes.

To learn more about how major the social platforms finished a tumultuous 2020, Insider Intelligence subscribers can read our full report: 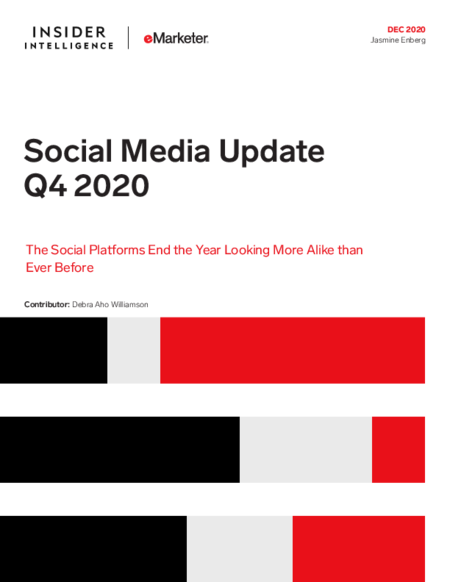