Canadian viewership will reach new heights this year, according to our latest digital video viewer forecast. Previously, we expected the number of video viewers to reach 28.0 million in 2024, but we now forecast that milestone will be met next year. Nearly 18 months of restricted public gatherings have led to more time at home and a strong appetite for long-form entertainment. Increasingly, that demand is being met by video delivered via the internet and apps.

YouTube is by far the most used digital video platform in Canada, with 25.8 million viewers this year. This is a reflection of the platform’s versatility with short clips and long-form content for everything under the sun, including entertainment, news, and tutorials.

Subscription OTT services like Netflix have fewer viewers than YouTube because they focus solely on entertainment. Additionally, there’s greater competition for eyeballs among these platforms. There will be 23.8 million subscription OTT viewers in Canada this year, which is up 4.1% year over year (YoY) and on top of a whopping 14.9% growth rate in 2020. The result is 1.7 million more viewers than we previously forecast.

Netflix is still the most popular OTT service by far, with 18.6 million viewers, up 2.9% over last year. We expect viewership will grow at a slower rate in the coming years. By 2025, Netflix will garner viewership from half of the population in Canada.

Prime Video will have 12.2 million viewers in Canada this year, up 14.3% YoY in 2021 but down from the 51.9% growth it experienced in 2020. Much of this growth is tied to Canada's ecommerce boom—retail ecommerce sales increased by 75.0% in 2020—as Prime Video viewers get free access to the service if they’re Amazon Prime customers. We anticipate Prime Video will rise from 10.7 million viewers in 2020 to 14.7 million by 2025.

With the dominance of US-based services Netflix and Prime Video, and the influx of newer services like Disney+ and Apple TV+ in the past few years, one might ask if there’s much room to compete for domestic players. Homegrown services, like Bell Media’s Crave nationally and Videotron’s Club Illico in Quebec, have established sizable customer bases, but they have a small share of the OTT viewer market.

CBC Gem is also available, but the public broadcaster doesn’t release numbers on usage. Rogers Media provides niche OTT offerings—e.g., the Citytv app and Sportsnet Now—but has not publicly stated how many users there are for each app.

Our first forecast for Crave, which launched in 2014, estimates that the service will have 6.8 million viewers in 2021. Bell Media reported that Crave had subscribers “approaching the 3 million mark” in Q2 2021, which are a mix of OTT users and pay TV on demand. Our viewer calculation applies a multiple based on the estimated number of viewers per household. We expect slower growth—low single digits—in Crave viewership in the coming years, but it will reach 7.3 million viewers by 2025.

Crave’s stability in the competitive OTT environment is based on Bell’s investment in a strong catalog of programming and the development of French-language content for Quebecers. Originally, Crave subscribers could choose between three English-only packages. But in January 2020, Crave extended its offering for French subscribers with additional French-language packages under the Super Écran label. 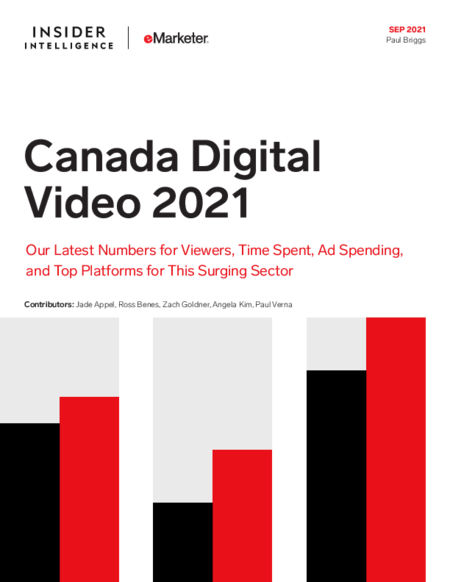