The Starting Gun Has Fired for the Voice Race

Amazon, Google, Samsung and Baidu are all off and running

By all accounts, the use of voice control technologies is growing around the globe. Here in the US, eMarketer's latest forecast expects the number of smart speaker users to rise at a compound annual growth rate (CAGR) of 47.9% between 2016 and 2020, from 16.0 million to 76.5 million. In 2018, more than 18% of the US population and 21.9% of internet users will use a smart speaker at least once a month.

Meanwhile, Juniper Research has forecast that by 2022, more than 5 billion voice assistants will be in use on smartphones worldwide (taking into account that multiple assistants may be installed on a single device). The firm also predicted that in the US alone there will be 870 million voice assistant devices on all platforms and form factors combined—including smartphones, tablets, PCs, smart speakers, connected TVs, cars and wearables. This is nearly double the estimated 450 million in 2017.

Apple’s introduction of Siri signaled the first voice assistant push into the mobile ecosystem, which has grown to include smartphones, tablets, headphones, wearables, laptops and other portable personal gadgets. Not surprisingly, however, the majority of voice assistant use still takes place on smartphones. According to a February survey by PwC, 57% of US internet users who had spoken to a device had done so on a smartphone, far outpacing other devices.

Currently, North America and Asia-Pacific are the two largest markets for voice control use. eMarketer projects that 91.0 million people in the US will use voice assistants at least monthly this year, representing 27.6% of the population. By 2020, that number will grow to 105.8 million.

In Asia-Pacific, China and South Korea are hotbeds of voice control technology development, and a study by J. Walter Thompson (JWT) Innovation Group and Mindshare Futures found that adoption was particularly high in Thailand and Japan. One reason is that the technology simplifies the use of character-based languages: 51% of regular voice control users in China and 57% in Japan said they used voice to save them from typing. In January, Accenture found that internet users in India and China showed relatively high interest in owning voice-enabled technology.

Usage is also strong in Europe. A multicountry survey by Capgemini, conducted in October and November 2017, found that 51% of consumers in the US, the UK, Germany and France already used voice control, with 81% doing so on their smartphones.

While Google and Amazon gained an early foothold in the US and are expanding into Europe and Latin America, China-based companies Alibaba, Baidu, Tencent, JD.com and Xiaomi are making the most headway in that country. Samsung, KT, Kakao Corp. and SK Telecom have established early leadership positions in South Korea and other parts of Asia-Pacific. This landscape could undergo dramatic changes if and when some of the players in Asia-Pacific gain a foothold in the US and/or Europe, or vice versa. 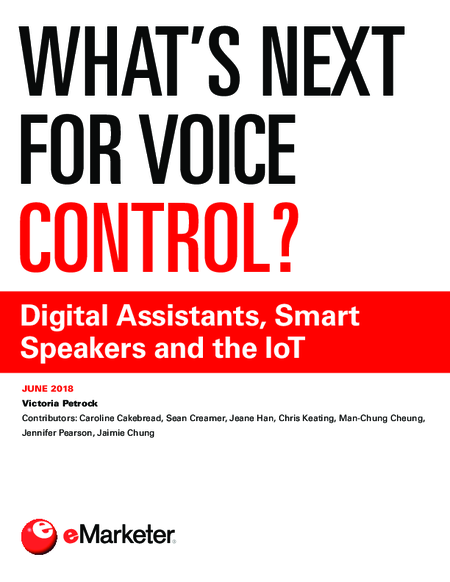 Report by Victoria Petrock Jun 27, 2018
What’s Next for Voice Control?

In the new episode of eMarketer's "Behind the Numbers," sponsored by Mower, the author of eMarketer's new report on voice, Victoria Petrock, discusses the market forces that are driving growth, and challenges for key players.

Voice’s potential as the future of online communication has drawn tech, telecom search and retail giants into a “voice race” to own the market. They are investing heavily in their own artificial intelligence (AI) voice assistants, aggressively pushing them into a variety of different devices and environments. Each player sees its voice control platform as a way to engage in continuous conversation (literally) with consumers, and as critical to protecting and expanding its core base of products and services.

For example, online retailers Amazon and Alibaba are designing systems that they hope will help them enhance voice commerce. Search leaders Google and Baidu are working to make information-seeking more frictionless, and Samsung is looking to enhance brand loyalty by connecting all of its products through seamless voice control.

“A platform war is starting now,” according to Tom Sepanski, Landor’s director of North America verbal identity and naming practice. “Apple, Samsung, Google, Amazon and others want you in their ecosystem; everybody’s been trying to own the home for a long time. But voice brings it to a whole new level, and it’s accelerating at a rapid rate.”

Most voice platform providers are working aggressively to embed their voice assistants in at least one of four primary ecosystems: personal mobile devices, home-based devices, vehicles and workplaces. Over time, they hope to turn their voice “ownership” of these environments into a competitive advantage that can be monetized. “Everybody’s building their walled gardens hoping to bring in as many users and leverage all of the connectivity between those products as possible,” Sepanski said.