The Three Ps of Gen X Tech Use: Plugged In, (Social) Platforms and Privacy

Adopting new technology is the norm among Generation X, and unlike digital natives, this adoption hasn’t crowded out old media. But before marketers can tap into Xers’ widespread accessibility, they should understand their unique device and media usage, social platform preferences and privacy concerns.

Gen X Is Plugged In

Splitting their time between new and old media, Xers are reachable almost anywhere. According to Q3 2018 research from Nielsen, US consumers ages 35 to 49 spend nearly the same amount of time with old media like live and timeshifted TV and radio, as with their digital devices by accessing apps and the web on a smartphones or tablet.

Xers Are Social, but Ads Are a No-Go

While this generation is digitally curious—our estimates show that 77.5% of Xers are social network users—their usage tends to be narrower and less experimental than younger generations.

They're most likely to stick with the platforms they know, which unsurprisingly means that nearly nine in 10 US Gen X social users are on Facebook. Just fewer than half are on Instagram, while Twitter and Snapchat remain the least popular with Xers.

While Gen X's social network usage and time spent makes it easy for marketers to reach them, they don’t love encountering social ads. According to a September 2018 survey from Morning Consult, 56% of Xers said there is too much advertising on the social venues they use.

One in three Gen Xers (ages 35 to 49) said they don't trust any social media channels, according to a December 2018 survey from Adobe. Nearly the same number of respondents (27%) said they are not comfortable sharing personal info with brands. These privacy concerns drop substantially when looking at younger generations, and those older than Xers express heightened privacy concerns, comparatively speaking.

Gen Xers' privacy concerns are understandable, as the cohort is willing to adopt and use newer technology, but with reservations.

“Privacy is less of a concern for this generation than it might be from a baby-boomer’s perspective,” said Ericka Podesta McCoy, CMO at research firm Resonate. “Xers understand the convenience factor associated with being more lenient when it comes to their digital privacy, but there must be an obvious value exchange.”

To reach these users, marketers need to make that value exchange appealing, but refrain from overstepping generation-specific boundaries.

For more information on the digital habits of Generation X, eMarketer PRO subscribers can read our recent report: 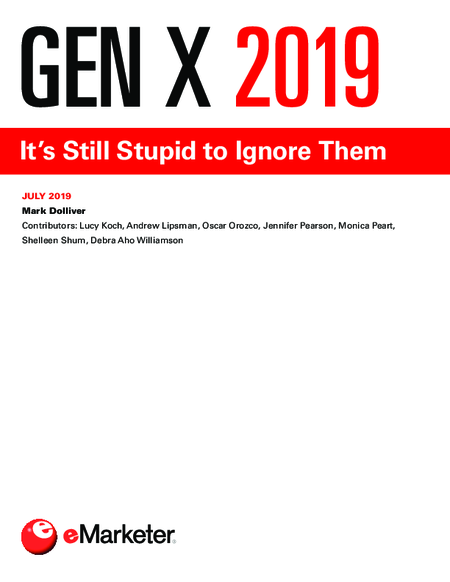