These are the top global ecommerce markets

Last year, the pandemic fueled rapid acceleration of online buying in several countries that were somewhat lagging—and some of those will continue to see major expansion in 2021.

Many of the national and regional rankings for retail ecommerce sales and growth have changed little since 2020. For example, the size and buying power of consumers in China remain key factors.

North America will rank a distant second, though digital retail sales there will approach $1 trillion this year. Latin America, which lagged behind Central and Eastern Europe in 2020, will leapfrog it this year with estimated sales of $131.4 billion.

China will remain the largest single ecommerce market In 2021

It will account for a remarkable 52.1% of all retail ecommerce sales worldwide this year, far outpacing the US’s 19.0%.

The top five ecommerce markets have remained the same since 2018. Moreover, we predict that China, the US, the UK, Japan, and South Korea will constitute the top five through 2025.

India will be the fastest-growing ecommerce market this year

Although India’s total retail sales growth dropped dramatically in 2020, ecommerce is soaring. We expect digital sales to leap 27.0% this year, as more retailers launch or expand their online stores. That will lift the country to eighth place in the annual retail ecommerce sales table. Russia will be another newcomer to the top 10 sales ranking, based on estimated growth of 26.1% in 2021.

The number of countries where ecommerce claims a double-digit share of total retail is on the rise, too. Prior to the pandemic, only eight of the 32 markets we cover recorded ecommerce penetration in the double digits. In 2020, that list expanded to 16 markets and will include 22 markets by 2025.

To learn more about which regions will generate the highest digital retail sales, Insider Intelligence subscribers can read our recent report: 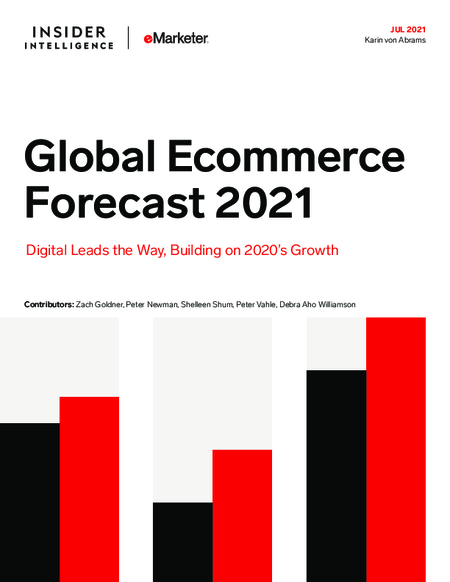