Toys Are Still Prevalent for Many Kids Today

Amid all the handwringing about screen time—plus the demise of Toys "R" Us—one could easily imagine that kids have lost interest in toys. But they haven’t.

Traditional toys, including board games and constructions sets, are still big among tweens, according to Michael Baer, senior vice president for brand and marketing at Ipsos Media Development, who was interviewed for our new report “US Kids 2020: Still Growing into Their ‘Digital Natives’ Label.”

Covering 2018, the latest full-year figures on US retail sales of toys from The NPD Group pegged the total at $21.6 billion, down 2% from the previous year but slightly higher than 2016’s total. Categories with gains over 2017 included action figures and accessories (up 10%) and dolls (up 7%). Categories showing declines included plush toys and vehicles (both down 10%).

The continued salience of toys is clear in the 2019 edition of an annual RoosterMoney report on items kids’ are given or purchase themselves. When US kids and teens ages 4 to 14 were asked what they’re saving their money for, Lego topped the list, while dolls came in at No. 5.

One category that has suffered in recent years is bicycles. Citing data from the Outdoor Industry Association, a May 2019 blog post by The NPD Group said kids’ participation in biking was down 19% since 2007. NPD’s own retail tracking data showed a 10% decline in unit sales of kids’ bikes in November and December 2018 vs. the same period a year earlier—though the Toys "R" Us travails may have been a factor. One bright spot: In November 2019 Field Agent polling on holiday shopping, bikes did appear in the top five categories of gifts requested by females in the 2-to-7 and 8-to-12 age groups.

A decline in biking is in sync with a broader concern that kids in the digital era aren't getting enough active play. Polling of parents with kids under age 12 by The Genius of Play (an initiative of The Toy Association) found 75% saying their children “are not getting enough active free play, such as running around or riding bikes,” according to a July 2019 release. “I do think there’s a sense of a growing indoor culture, compared with how kids used to go out and find their people,” said Michael Preston, executive director of the Joan Ganz Cooney Center at Sesame Workshop. “Now they can quickly find them online, or they’re for any number of reasons not going outside, for better or worse.”

While digital activity can detract from kids’ attention to toys, it can also generate interest in them. The “unboxing video” category promotes toys, as do popular YouTube toy-review channels like “Ryan ToysReview” (now renamed “Ryan’s World”). A Pew Research Center report in July 2019 said 28% of children’s online videos “were related to toys or games.”

eMarketer PRO subscribers can learn more about the distinctive contours of kids' digital usage, as well as how video and gaming are a bigger deal for this group than smartphones and social media. 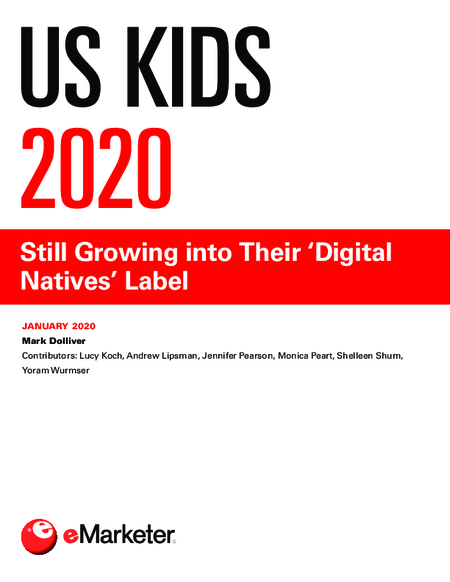 Not sure if your company subscribes. Find out here.