The ad market in the UK suffered during 2020, but the decline in spending was only marginal as digital investment took up much of the slack. Indeed, the resilience of digital formats has been palpable amid the pandemic.

In our March 2020 forecast, which we made before the global crisis, we had predicted digital spending in 2020 would rise by 12.0% year over year (YoY) to reach £16.84 billion ($21.60 billion). One year later, those estimates proved to be only slightly low, as spending reached £16.46 billion ($21.11 billion), up 8.0% YoY. And post-pandemic, we expect digital spending to be even higher than originally expected.

It’s no wonder, then, the two digital behemoths, Google and Facebook, both made it through 2020 relatively unscathed. That doesn’t mean they fared equally well, though.

Google’s performance was solid, but its reliance on search meant it struggled and saw only marginal gains in 2020. Growth in net advertising revenues was actually a big win for the company, though they rose by just 4.4% to £6.38 billion ($8.18 billion). Pre-pandemic, we had predicted revenue growth of 10.1%, but in our interim August 2020 forecast, we estimated that the tech giant’s ad revenues would actually drop in 2020, by 2.8%.

That Google was able to do so much better than predicted was largely due to YouTube. Display ad revenues accounted for 19.1% of Google’s total ad revenues in 2020—our pre-pandemic estimate was 17.6%—and YouTube’s 56.1% contribution to that figure was nearly 3 percentage points higher than our March 2020 estimation.

Such growth might have influenced Facebook’s new Instagram strategy, which concentrates heavily on digital video. Instagram now offers five separate places users and marketers can incorporate video: the feed, Stories, Live, Reels, and IGTV (recently launched in the UK). While there’s little differentiation among the products, the strategy appears to have paid dividends for Instagram: The platform’s ad spending rose by 45.1% in 2020 to £1.98 billion ($2.54 billion), growing slightly slower than our pre-pandemic estimate of 47.9%.

Facebook’s fortunes along with Google’s steady gains mean the duopoly will hold its top position in the UK market for the foreseeable future. This year, the two will capture 68.5% of total digital advertising dollars in the UK, and that proportion will hold steady throughout our forecast.

Even so, some disruption might come from the smaller social players. Snapchat will increase its share of the market annually to account for 1.3% by the end of 2023, and expect TikTok to beef up its advertising products in the coming years.

And then, of course, there’s Amazon.

To learn more about how digital formats dominated the UK ad market during the pandemic, Insider Intelligence subscribers can read our recent report: 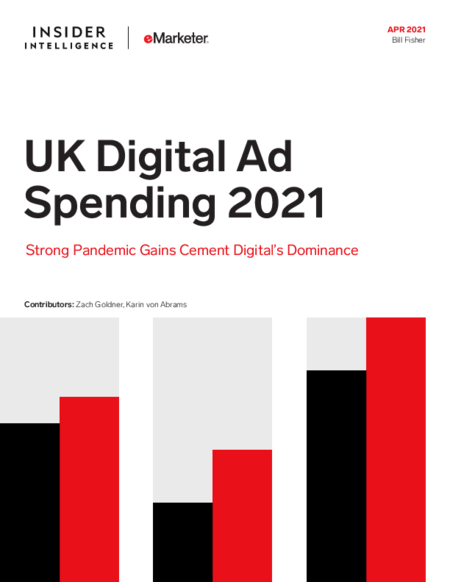 Article
Meta and Google embrace the art of ‘quiet banishing’