UK Holiday Shoppers Will Be Driven to Digital This Year

Digital retail will have a huge impact on UK shopper trends in the coming holiday season. This year, ecommerce will account for nearly a third of all holiday spending, its largest share to date. Brick-and-mortar shopping, meanwhile, remains on the precipice.

For 12 weeks starting on March 23, the government shut down nonessential retail stores in the UK as part of strict lockdown measures. UK consumers who wanted to purchase anything other than groceries or medications could not do so in-store.

Even when the lockdowns eased on June 15, things were far from normal on the UK high street: Social- distancing measures meant queues were commonplace and footfall in stores was limited. In-store mask wearing was strictly enforced. Large proportions of the population with medical conditions were advised to stay at home, while many others eschewed physical shopping altogether out of an abundance of caution.

These issues and concerns with in-store shopping won’t pause for Christmas, and so online shopping will take the strain of the seasonal demand. The added impetus of another lockdown through November, meanwhile, will further fuel this digital trend. This year, retail ecommerce holiday season sales will reach £28.51 billion ($36.38 billion), up 16.7% over last year, and account for a substantial 32.2% of total UK holiday sales in 2020. That’s more than three in 10 holiday retail pounds—the highest proportion ecommerce has claimed since we started tracking this metric.

The high street will certainly look very different for the consumers who do make it out of the house for holiday season shopping this year—when they’re allowed. According to data from the Local Data Company (LDC) and PwC UK, there was a record number of store closures in the UK in H1 2020—11,120. (For the purposes of comparison, the study defined H1 2020 as January through August 2020, with no fieldwork conducted during the March–June nationwide lockdown.) Though 5,119 stores opened during this period, the net decline of 6,001 stores represents almost double the decline during H1 2019 (3,509 stores).

In a press release for the LDC and PwC UK research, Lucy Stainton, head of retail and strategic partnerships at LDC, said, “The results from H1 2020 are a stark reminder of the challenges faced by retailers in the first six months of the year, which included a national lockdown. There are signs that this is just the tip of the iceberg, as 22% of the multiple market [retailers with multiple sites are] still closed temporarily.

“With each week that passes since retail and hospitality businesses were given the green light to reopen, the likelihood of these occupiers ever trading again in those units reduces. This, alongside the impact of local lockdowns and other restrictions … will continue to have a devastating impact on the sector with more closures likely to fall in Q1 2021 following the busier golden quarter.”

The last thing that physical retailers needed going into this golden quarter was further restrictions. On October 12, the UK government acted to suppress rising rates of COVID-19 infections in specific regions of the country by implementing a three-tier alert system, whereby each region’s restrictions varied depending on its infection rate and the tier it was placed on.

On October 31, the government announced that this system would be superseded by another nationwide lockdown, running from November 5 through the end of the month. Although restrictions won’t be quite as severe as those of the earlier lockdown, all nonessential retailers will be required to close their doors once again.

To learn more about how COVID-19 will impact the UK’s holiday shopping season, eMarketer PRO subscribers can read our recent report: 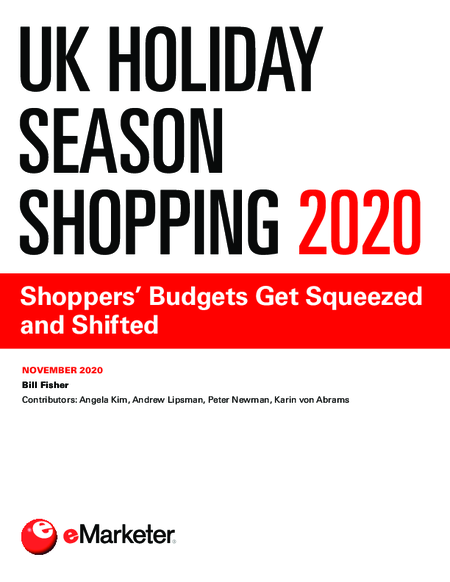 Article
Discounting may be key for retailers to capture holiday sales. Here are four steps to make sure ...

Report
Retail Trends to Watch for 2023

Article
Online sales of health, personal care categories are growing. Here are 3 strategies to tap into that ...

Article
Holiday shoppers stick with online-only retailers, but the venue is changing

Article
Fanatics’ valuation is up 15% since March