Life is different during a pandemic, and that includes shopping. Retail businesses are closed in most states, and the ones that are open are doing business differently with social distancing practices like curbside pickup. And consumers are shifting more to ecommerce out of necessity.

Ipsos and USA Today surveyed US adults March 10 and 11 and again April 9 and 10. More respondents were taking a long list of actions to protect themselves from the coronavirus, including washing their hands more and avoiding social events. In the second wave of the survey, 41% of respondents said they had shifted more of their shopping from physical stores to online—up from just 13% who had done so in the first wave.

“More online, less in-store” is the clearest shopping trend so far. Others are a bit murkier: People seem to have spent more toward the beginning of the crisis, likely to stock up on supplies. Now, most are pulling back on spending either because they’re stuck at home or worried about potentially dwindling incomes. Meanwhile, others continue to spend more than normal, perhaps because of disrupted routines.

According to Morning Consult’s weekly coronavirus survey tracker, 47% of US adults said they were spending less during the pandemic as of April 10 to 12 vs. 21% who spent more. A week later, only 18% of respondents reported spending more, while 49% were spending less. In the April 29 to 30 update, more than three in 10 respondents said it would be difficult or extremely difficult to get by if social distancing continued for another month—including 12% who said they would have trouble affording food.

Earlier research conducted March 16 and 17 by McKinsey & Co. found that about three in 10 US adults reported spending more than usual during the first half of March (possibly to stock up), with a plurality spending the same as usual. But respondents expected to pull back on spending in the second half of the month, with 44% saying they would spend less than normal.

Other polling conducted around the same time by Coresight Research found that just more than half of US adults said they were buying more within certain categories. Only about three in 10 said they were already buying less at that point.

Marketers may be wondering which of these behaviors are likely to stick as “the new normal.” Almost half of respondents to the Coresight Research survey on March 18 said they expected to retain their new way of life long-term.

In Wave 8 of The Harris Poll’s research, almost 80% of US adults surveyed April 18 to 20 said they would save more and spend less after the pandemic ends, and more than two-thirds said they would still avoid nonessential travel. Almost half of respondents planned to do at least some grocery shopping online. And about three in 10 claimed they would keep homeschooling their kids or move out of the city post-pandemic.

“Survey questions like this must be taken with a grain of salt but do point to consumer feelings and aspirations,” said Nicole Perrin, principal analyst at eMarketer and author of our latest report, “US Consumer Confidence amid the Coronavirus Pandemic.” “Long-term forecasts right now can often seem like wish-casting—but it’s hard not to think that an extended period of working from home would lead to more demand from knowledge workers for the ability to live outside expensive coastal cities.”

For more on consumer concerns about an economic slowdown and analysis of shopping and at-home behaviors amid the pandemic, eMarketer PRO subscribers can read our recent report: 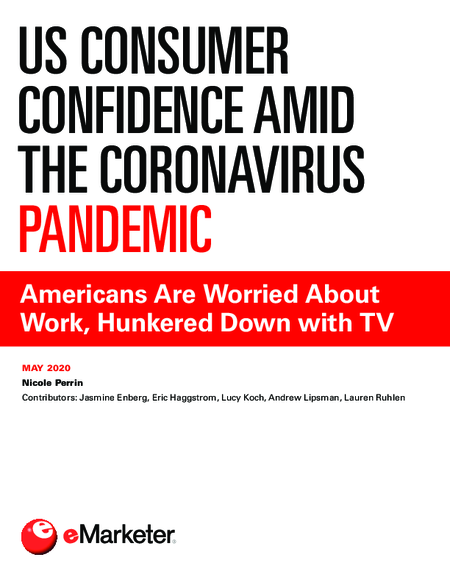 Report by Nicole Perrin May 07, 2020
US Consumer Confidence amid the Coronavirus Pandemic

Article
Q&A with Sephora: Makeup in the metaverse

Article
Inflation is driving digital grocery growth in the US, but there’s more to the story

Article
US social buyers are spending more than ever

Report
How Economic Stress and Inflation Are Changing Consumer Behaviors

Article
The state of US household spending

Article
Facebook will stay atop the US social commerce ladder