Out-of-home (OOH) ad spending is getting back to where it once belonged. Prior to the pandemic, OOH was steadily growing, which was impressive for a medium still primarily rooted in traditional ad buying. In 2019, OOH ad spend grew 7.5% to reach $8.65 billion. But it has not hit that level of spending since.

When lockdowns became widespread and advertisers retained tenuous control over their budgets, OOH ad spend plummeted in 2020, dropping by nearly one-third. Last year, the industry began its rebound, adding about half of the ad spending lost in 2020.

This year, OOH spend will grow 12.0% for a total of $7.93 billion. In absolute dollar terms, this puts OOH very close to where it was before the world had heard of COVID-19. But on a few other measures, OOH still lags behind its not-too-distant glory days.

The share of total media ad spending going toward OOH remains down. In 2019, 3.6% of all US media ad spend went to OOH. That share dropped to 2.5% the following year and then to 2.3%, where it will remain this year. In other words, over the last three years, total media budgets expanded significantly but OOH did not. The result is a smaller share of total ad dollars being allocated toward outdoor placements.

Another thing to consider is inflation, which remains historically high. Given inflation levels since 2019, OOH ad spend in 2022 would have to reach $10 billion to equal its pre-pandemic levels in real terms. This year, OOH ad spend will be about $2 billion short of that figure.

Taken together, we see that the outdoor ad market is much healthier than it was during the early pandemic. But it accounts for a smaller share of total media ad spending than it used to, and its recent gains don’t look as impressive when considering inflation. These factors combine for an uneven comeback. 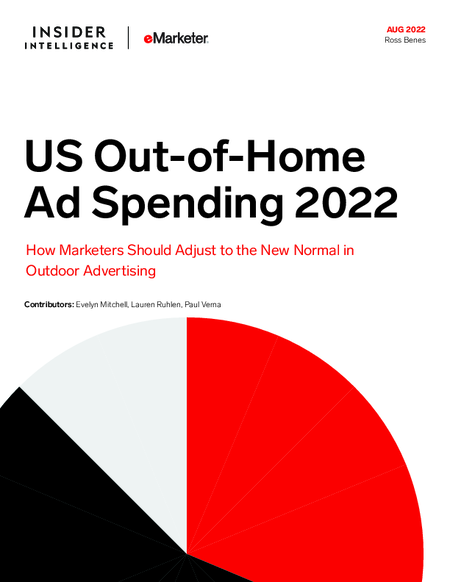